5 Head Over to Japan to Rework Your Toyota GR Yaris With More Gazoo Racing Goodies
Car video reviews:
Up Next

Subaru Kicks Off the Forester SK Upgrade Mission at Home in Japan, SUV Is Bolder

Ever since it first came out, the Toyota GR Yaris has been the talk of the town. Is it really that we missed a hot hatch so badly, or does it have more to do with the fact it came from Toyota, a brand better known for stuff like the reliability of its vehicles rather than the excitement they produce?
11 photos

However, the GR Yaris isn't just another hot hatch. In a time when most manufacturers look to make their cars as modern as possible, the Japanese model seems to follow the recipes of old that favored an engaging driving experience above everything else.

Automatic transmission? Nope, just a six-speed manual that likes to be roughed a little. Front-wheel-drive? How about adjustable all-wheel-drive that can, and will, send more of the power to the rear wheels when needed. Two-liter four-cylinder turbo? Wrong again because, as you know, the GR Yaris has a three-cylinder 1.6-liter turbocharged powerplant that makes way more power than a unit this size ever should: 257 hp (260 PS).

But those are all just numbers and, try as they might, they can't possibly do justice to just how immensely fun it is to hoon this car around a track - or a dirt road, for that matter, seeing how it's the street-legal homologation special of a rally car. The fact it can do both of these so well is yet another reason to stand in awe at what Toyota has created.

But just how good is it around a track? Well, we could give you some lap times and compare them to those of other models but we feel like the GR Yaris deserves something a little more action-packed. So instead of that, how about a lap where it's chased by the new BMW M4 Competition?

The guys at Auto Express looked at the two cars and decided something needed to be done to level the playing field a little. With that in mind, they decided to give the Yaris a flying start, whereas the M4 would have to make use of its launch control system to get up to speed as quickly as it could.

Once both cars were in motion, each had a very simple task: the BMW had to try and catch the Yaris, while the latter obviously had to stay in front of its chaser. With 503 hp (510 PS) and the renowned BMW proficiency around a track, it's pretty hard to predict how this is going to pan out. Obviously, the length of the track plays a big role, as do the drivers of the two cars, so just sit back, enjoy, and don't expect any science-proof results. 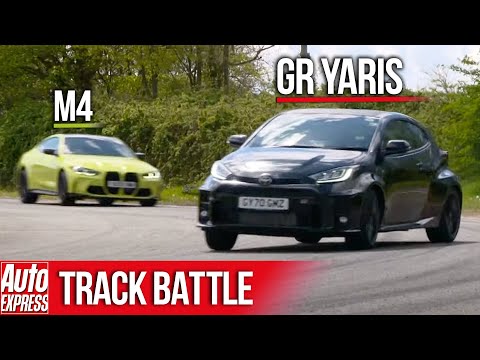