Three European wagons with wildly different powertrains - now that sounds like an interesting drag race. Carwow has just organized a shootout between the Volvo V60 T8, the BMW M340i Touring, and the Audi S4. It's yet more proof that BMW makes some of the sportiest normal cars around.
4 photos

In a way, this drag race is a bit unfair, as the rivals haven't got matching engines. But it's not our fault that Volvo stopped making six-cylinder engines or that Audi switched its focus back to TDI. What's up with that?

While we're on the subject, let's look under the hood of these three, starting with the S4 Avant. This is a European model with the facelift and it has 347 PS (342 hp) from a 3.0 TDI that also boasts mild-hybrid assistance. The output isn't much lower than the TFSI that's been replaced, while torque is the highest of this drag race.

The V60 T8 is perhaps the strangest of the lot. While there used to be an inline-6-powered Polestar V60, this T8 is powered by a 2.0-liter four-cylinder. It's turbocharged, supercharged, and assisted by electric motors, giving this car the highest power output in the race at 386 hp.

And finally, the M340i Touring has the same TwinPower Turbo (single-turbo) 3.0-liter as the American sedan, but with about 10 hp less to its name. Still, the AWD Bimmer easily demolishes its opponents for an easy victory. The 3 Series is also now available as an M340d, which from what we understand uses a twin-scroll turbo now instead of the twin-turbo of old. These German cars are changing almost every year in order to meet emissions targets.

Of course, the real performance wagon war only starts when the M3 Touring finally makes its production debut in about a year. That's when we'll learn if Audi's RS4 Avant has what it takes. 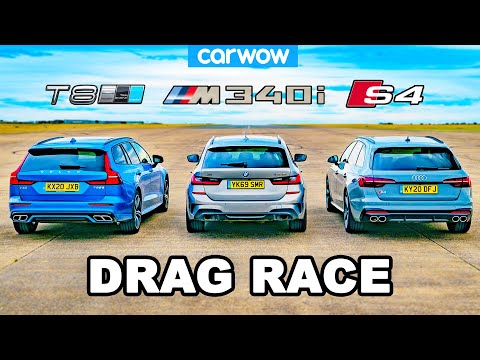