2 The BMW M3 Wagon Is Nearly Here, but We Almost Got One More Than Two Decades Ago

5 23 Year Old Volvo Might Make You Want To Party Like It's 1999, Is Still Quick
Car video reviews:
Coverstory

BMW M3 Gets Tuning Box, Hits the Highway to Check for Improvement

BMW's G80 M3 comes with the same idea for its front grille as its M4 sibling, and we can now say that you might get used to it. A tuned example, which comes with a claimed 660 horsepower, has something to prove. Some might say that it will show that it is not the face of the car that counts but it's 100 to 200 kph (62 to 124 mph) sprint that matters. As long as you are behind the wheel, you cannot see it, so it makes sense.
6 photos

For the full 0-62 (0-100 kph), an additional 0.2 seconds are required. The example seen in the photo gallery and in the video below is fitted with 20-inch wheels made by Edelweiss. It also has a neat wrap that looks great on it, if you do not mind our opinion on the matter.

Now, the S58 motor is powerful in stock form, but that does not stop people from tuning it. The example in the video comes with the RaceChip GTS Black unit, which is a tuning box that can be installed and removed with ease. The company prides itself on offering a two-year warranty for the engine, and the customer will be able to get free reprogramming (just once, though) if they switch cars and keep the unit.

As we noted above, this model now prides itself on having 660 horsepower after the installation of the tuning box. It is important to underline the fact that custom ECU software might bring more power and torque, but it might leave the vehicle without the coverage of its factory warranty.

With a plug-in unit such as this one, the changes are reversible, so it might not be an issue for those who have a concern on that matter. In case you were wondering, going back to the stock tune on a vehicle's ECU can be detected by dealership employees. It all depends on the terms of the warranty in your country, but dealership employees tend to be skeptical of performing warranty work on modified vehicles.

With that in mind, check out how the slightly modified M3 accelerates on the German Autobahn. Mind you, the sound that you will hear as the gears are shifted is generated from the speakers of the vehicle after an infotainment update that has changed the ActiveSound system. The latter change has affected many other M3s and M4s, but this is the first time we all get to hear it.

If we already had a fake engine noise even for some M cars, the latest infotainment update brings fake pops on upshifts. One can only hope it is just a deterrent for people going to reflash their ECUs to get the same effect with their tune. Who knows, maybe this will make pops and bangs tunes uninteresting. 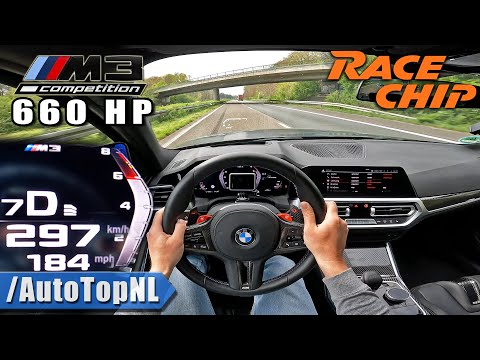