BMW M3 and M4 Up Close at Geneva

Gabriel Nica
The Geneva Motor Show 2014 floor couldn’t miss out on the latest M cars from Munich, the M3 and M4. The tandem was brought forward in the same colors as at all the previous shows up until now, the sedan wearing Yas Marina Blue while the coupe dressed in Austin Yellow.
1 photo
It’s therefore pretty easy to see why there’s such a fuss surrounding the two, as BMW decided to create these colors from scratch, especially for them.

Tim, the guy also known as Shmee150 around the internet, took the time to get an up close video of the dynamic duo and share his thoughts on them as this is the first time the Germans decided to divide the 4-door and 2-door versions and created different vehicles with similar specs.

The S55 engine under the bonnet has 6 inline cylinders adding up to a total of 3 liters of displacement that, thanks to direct injection, two turbochargers and a lot of Motorsport innovations, make 431 healthy HP and 550 Nm of torque, making the old V8 seem ancient.

The range of innovations imbued in them is simply mind blowing if you start to think about it. In the desperate attempt of reducing the weight as much as possible Carbon Fibre Reinforced Polymer was used everywhere possible. The roof, boot lid, seat backs and even the driveshaft were made from the lightweight material to keep the weight in check. The result? The first ever M3 that weighs less than its predecessor. Actually, it’s nearly as light as the iconic E46 model that is still being used as a benchmark, with a sub 1,500 kg (3,300 lbs) DIN weight. 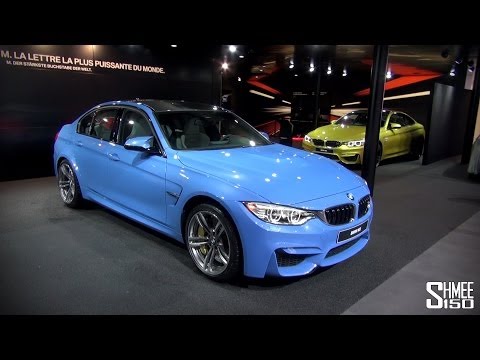