If there's one thing the splurge of drag races we've watched over the years since YouTube was invented has proven is that all-wheel-drive and automatic gearboxes that shift in milliseconds are the key to success.
7 photos

Actually, you can do even better than lightning-fast gear shifts by employing the EV solution - no gears at all. Instead of wasting time switching between cogs of different sizes, why not make use of that immense reserve of torque and the high-revving motors by having a single gear ratio that covers the entire speed range?

Well, these two cars couldn't be more different. They may be tiny and light, but they're definitely a couple of dinosaurs in terms of technology. They represent the past - and not just any part of it, but the best. They're the kind of vehicles you go for when you want to feel the unadulterated thrill of driving a car that requires you to use all four of your limbs at the same time. You might even feel the need for a fifth at certain times.

The first one is the BMW M2 Club Sport, a car we've talked about before and come to the same conclusion each time: this might just be the best BMW you can buy. Assuming you could still buy one of these, that is. It gets 450 horsepower from a turbocharged three-liter straight-six which, together with the 406 lb-ft (550 Nm) of torque, get funneled toward the rear wheels through a six-speed manual transmission.

It's a lot easier to predict what will happen when there are AWD, automatic cars involved because the human factor isn't that important apart from the reaction time. Here, though, every gear change can make the difference between winning or losing, not to mention the importance of that initial launch. So, is Tiff Needell going to use his driving skills to win in the Cayman GT4, or is his co-host Paul Woodman going to snatch it in the M2 CS? Well, no point in guessing when the answer is only one click away, so you know what you have to do. 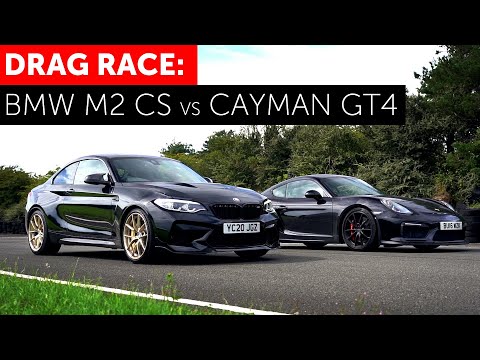