Home > News > Car Profile
Mihnea Radu
For years, BMW and Mercedes led us to believe that the Golf R is not a good hot hatch. But 2019 marks the launch of two nearly identical cars, the M135i and AMG A35. Today, we'll once again try to find out how they stack up in terms of performance.
1 photo
Of the two premium automakers, BMW made the biggest downgrades. The M135i is nothing like the car you remember; it's based on a front-wheel-drive platform, and while xDride comes standard, it's nowhere near as playful as the one on other M cars.

Both models place their 2.0-liter four-cylinder turbo engine longitudinally. They're also equal in terms of power at 306 hp. However, the BMW makes a tad more torque, 450 Nm. But that doesn't seem to be reflected in real-world performance.

Dutch magazine AutoTopNL put both hot hatchbacks to the test on an unrestricted section of the autobahn, just the place where the top end can be explored. GPS data shows that both the M135i xDrive and the A35 4Matic reach 100 km/h (62 mph) in 4.9 seconds, which is no different from the Golf R that's about to be retired. Over a virtual quarter mile or up to 200 km/h the BMW is a bit quicker, but just by a few hundredths of a second.

At the end of the day, you should just have the one you like, and people seem to have more complaints with the Bavarian car. These range from the way it sounds to the way the digital dashboard is set up. Our biggest issue is with pricing. In both cases, you'll need an optional body kit for the full hot hatch look, and by that time, you'll probably have spent €50,000 or more. Wasn't the whole point of the hot hatch to be an epic family car? For the money, you can have a "serious" car or something with more cylinders. 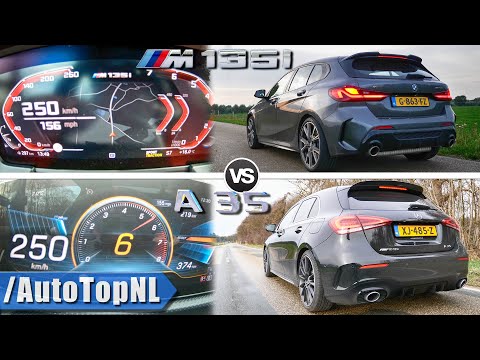