1 Liberty Walk Waves Magic Wand Over the Nissan Silvia, Turns It Into a Racer Lookalike

2 BMW i8 Is a Huge Trump Fan, Mixes the Flags of the U.S. and Israel

4 BMW i8 Production Ending This April, No Direct Replacement Planned

5 BMW i8 Ultimate Sophisto Edition Says Goodbye to the World in Frankfurt
Car video reviews:
Up Next

BMW i8 Leads Its Owner Into Temptation, Liberty Walk Helps It Sin

Production of the BMW i8 ceased in mid-2020, after six years. During that time, around 20,500 units rolled off the assembly line, turning heads wherever they were seen, even if it wasn’t the brand’s prettiest model.
13 photos

Some owners left them stock, using them on their daily commutes, whereas others, including the person whose name is written on the dotted line of this purple example, have tuned the heck out of them.

This one was signed by Liberty Walk, and you can tell, as it sports their typical swollen-up design. Apparently, their second i8 in Europe, the company based in the Land of the Rising Sun says that it started life with a grey paint finish, and after going to and fro with the owner, they decided to repaint it in Twilight Purple.

The reinterpreted front bumper has a chin spoiler attached to it, and side blades on both sides. The bolt-on fender flares, which are basically Liberty Walk’s signature, have been applied to this electrified Bimmer, which also sports bigger side skirts and more aggressive front hood. The ducktail spoiler contributes to the styling, and the car features gold accents around the kidneys, and on the side skirts, contrasting the purple and black overall looks.

For the wheels, the tuner turned to Vossen, choosing a forged set. The alloys have a Y-spoke pattern, two-tone finish, combining silver and gold, and thin tires wrapped around them, made by Continental. Last, but definitely not least, an air suspension has been installed too, lifting or lowering the body at the push of a button, and contributing to the revised stance.

Making the i8 look like this was a messy job, and Liberty Walk has revealed some of it on video. Shared on its official YouTube channel, the footage is a little over 2 minutes long and shows the extensive amount of work that has gone into the vehicle, concluding with a few static shots.

Back when it was still in production, the BMW i8, which was built on an aluminum chassis, with a CFRP passenger cell, in order to compensate for the weight of the battery, had an MSRP of $150,000. Nowadays, you can buy one on the used car market for over $70,000, or around $120,000 for a low-mileage example. 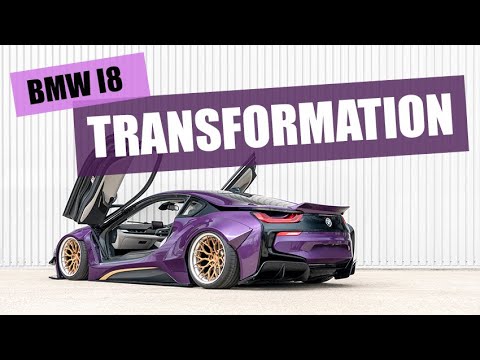