5 This Norwegian Just Won a Free Tesla Model X Thanks to His Referrals
Car video reviews:
Up Next

BMW i4 Takes the 1,000 km Challenge, Shows Impressive Results Despite the Cold Weather

Norwegian YouTuber Bjorn Nyland has the bad habit of torturing electric vehicles in long-range tests to learn how well prepared they are for long trips and day-to-day driving. The latest to face the 1,000 km (621 miles) challenge was the BMW i4 M50. Thanks to its strong fast charging capabilities, it completed the test in a little over 10 hours, or among the best vehicles tested by Bjorn.
14 photos

BMW is one of the pioneers of electrification and its strange-looking i3 was certainly a trendsetter. The Bavarians used the experience to move into more mainstream territory with an electric version of the 4 Series Gran Coupe, this time correctly identified as the i4. This is a proper rival to the Tesla Model 3, both in terms of performance, but also when it comes to range and efficiency.

That’s exactly what Bjorn Nyland tries to demonstrate with his 1,000 km challenge. This is a cleverly imagined test that takes into account different factors, like efficiency, range, and fast charging capabilities. The goal is to complete the test in as little time as possible by combining fast charging techniques and economy driving. There’s always a fine balance between going faster and spending more time at a charger, but, indeed, cars with faster charging capabilities fair well in this test.

The BMW i4 completed the test in 10 hours and 10 minutes, which is just five minutes behind the Tesla Model 3 with the LFP battery that Nyland recently tested. Both tests were carried out in similar weather conditions, at an average temperature of 5 degrees Celsius (41 degrees Fahrenheit), so it’s safe to assume the BMW i4 and the Tesla Model 3 are a close match in this regard.

During the challenge, the i4 was charged six times, which is on course for this kind of test. Thanks to its 200-kW DC fast-charging capability, the i4 spent little time charging, which helped it with a good result overall. Of course, in better weather conditions, the BMW would’ve gotten to the end of the race sooner.

In another round, Nyland also tested the i4 M50’s range, at an average speed of 90 kph (56 mph). It turns out the bimmer could do 385 km (239 miles) in cold weather conditions. The limited power Turtle mode engaged at about 2% state-of-charge (SOC), and the car arrived at a charging point at 1% SOC. 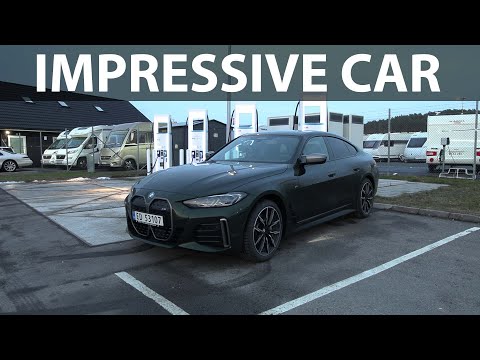