Vlad Mitrache
The BMW i8 was one of those models manufacturers put out once in a blue moon to show everyone they can still make very cool cars if they wanted to, or better yet, if the market proved it could handle it.
7 photos

The i8 is also a car that looks like it has way more power than it actually does. It's not that it's slow or anything, but if there's one thing I'll never forget is the face of this one guy who asked me what engine the i8 I was reviewing had. His eyes were gleaming with expectation, his mouth smiling with expectation, his salivary glands entering overdrive over the prospect of a juicy V8, if not something with even more cylinders.

I swear he very nearly attacked me when I told him it had a 1.5-liter three-cylinder, very rightfully thinking I was mocking him. If you don't know anything about this car—or cars in general and how they've developed over the past years—you can't fathom how something looking like this could have anything less than a V6, and we're even making a concession here with the six-banger.

The thing is the i8 comes from an age when BMW's approach to electrification was different from the path it's gone down right now. Back then, the plan was to make the "i" range a complete spinoff with unique designs and models that loosely corresponded to the ones in the standard lineup. They would use advanced materials and cutting-edge technology, making them cool but also quite expensive.

In the meantime, the Bavarians decided to develop their electric vehicles on the same platform as their ICE counterparts, meaning they will share the same dimensions and roughly the same design. After all, didn't people complain about the i3 being too "quirky"? Didn't they say manufacturers should make EVs look more normal, more like their other models?

Well, the people didn't know BMW would come up with this design for the 4 Series, did they? Had they predicted that, we're pretty sure we would have had at least an online petition calling for a rethink of its appearance, if not some actual protests. And the thing is, the ICE-powered coupe also spawned a similar-looking electric sedan in the i4, further spreading the monstrosity that is its enormous grille.

With the i8 being so universally acclaimed as a great design and the i4 being the exact opposite of that (at least as far as its front end is concerned), taking the former's face and plastering it over the latter's would surely solve the problem. Right?

You'd think so, but apparently, you'd be wrong. Marouane Bembli, the artist formerly and currently known as The Sketch Monkey, tried this face transplant, and even though you can't fault his work in any way, the result is far from convincing. Is it a better-looking i4? Well, you could drive it head-first into a concrete wall and get a prettier car, so that's not exactly relevant.

This shows how important it is to give a car's design a wholesome approach instead of piecing different parts together. It's why even though there's an entire team that works on designing a car, one person signs off the final appearance in the end. You need coherence, and that's one of the few things a collective isn't better at than one person.

One of the other reasons this face swap probably doesn't work is that the two designs it mixes are almost a decade apart. Sure, the i8 was ahead of its time, but look at its headlight graphics. Even though it was the first BMW to use laser headlights, they still look outdated compared to modern styling, which is also probably why Marouane felt the need to replace them with the original ones. However, the smaller grille definitely works, so well done, BMW, for missing that opportunity with the i4. 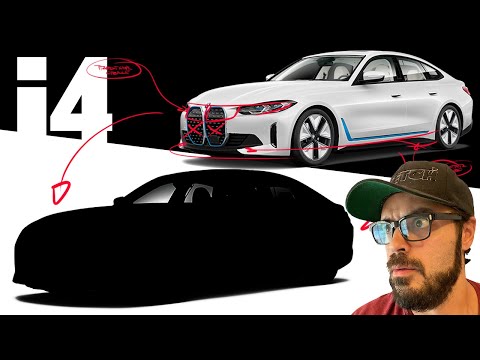 Editor's note: BMW i4 pictured in the gallery