1 BMW i4 Disappointed in the Latest EuroNCAP Test Round, and Here Is Why

3 BMW i4 Takes the 1,000 km Challenge, Shows Impressive Results Despite the Cold Weather

4 Tesla Model Y Goes Through the Moose Test, America Should Be Proud

5 Did You Think the New BMW M4 Can Pass the Moose Test? Boy, You Were Wrong!
Car video reviews:
Coverstory

BMW i4 Embarrasses Itself in the Moose Test, It's Cone-ageddon

You’d’ve thought BMW knows how to make a car nimble and agile. After all, this is their bread and butter. And yet, the battery-electric i4 doesn’t seem to follow the steps of its more famous ancestors. Put to the popular moose test by the guys at km77.com, the BMW i4 only managed to embarrass itself.
8 photos

The i4 might be the most compelling electric vehicle in BMW’s lineup, considering it has great specs and a design that makes it desirable. And yet, the new electric four-door coupe started its career on the wrong foot. Earlier this month, the i4 was penalized in EuroNCAP crash tests, where it only qualified for a four-star rating. While this might not be considered essential for the fans of the brand, a new adventure shows a more serious problem for the electric bimmer, right at the heart of BMW culture.

The guys at km77.com like to test cars in the famous “moose test,” and this is true both for ICE and electric vehicles. If you’re not familiar with the term, the moose test simulates a sudden encounter with a big animal (a moose), prompting the driver to make avoidance maneuvers. The test is standardized and follows the ISO 3888-2:2011 norms, providing precious information about how different car models handle a sudden avoidance maneuver. Generally, electric vehicles tend to perform better than ICE cars, but EVs derived from ICEs are worse.

In the case of the BMW i4, the test did not end very well. The rear-wheel drive eDrive40 only completed the test at a maximum entry speed of 73 kph (45 mph), far from the projected 77 kph (48 mph) that inspired the name of the Spanish news outlet. Not only that, but the i4 proved unsafe to drive once the electronic stability software was disengaged.

The BMW i4 did a lot worse than the Tesla Model 3 (83 kph/52 mph) and the Tesla Model Y (same performance). The affordable Kia EV6 also fared better than the i4, completing the test at 78 kph/48.5 mph. All these models are purpose-built EVs, unlike the i4, based on the BMW 4 Series Gran Coupe. We must stress that the BMW M4 Coupe did not do much better in the moose test (76 kph/47 mph), with clear oversteer tendencies.

The BMW i4 also violently oversteered during the test, ending up in the plastic barrier on the side of the track. The testers suspect the Hankook tires might not be up to the task. This and the fact that the i4 eDrive40 has the only electric motor on the rear axle makes it tail-heavy enough to behave erratically at its grip limits. Watch the video below and tell us what you think. 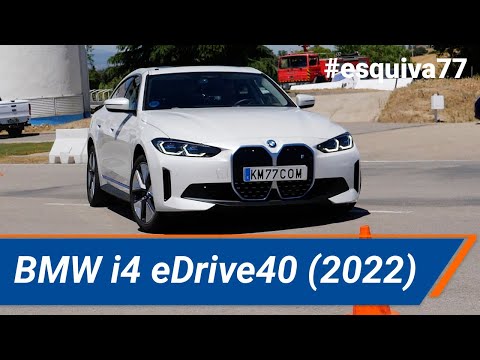