1 Tuned VW Up! GTI Is One AWD System Away From Getting the 'R' Moniker

3 Tesla Model S Plaid Faces Tuned GT-R on a Drag Strip, You See Where This Is Going

Getting a head start is very important in any kind of race. And Elon Musk made his move towards vehicle electrification before most companies were even thinking about doing the same. So it's not hard to understand why Tesla is now the largest automaker by market capitalization. But the race isn't over yet.
10 photos

All the big manufacturers have joined the fight. Every year we see more and more electric cars coming out, and they're increasingly faster with each new generation. Companies like Ford and Audi are striving to make their EVs more appealing to the general audience using viral videos and other activations. Audi's new connection with Ken Block means we're going to have an Electrikhana film coming up soon, but will BMW follow in the same footsteps?

Right now, BMW has two different electric vehicles on sale: the iX and the i4. Meanwhile, Tesla is upfront with 4 cars: the Model S, the Model 3, the Model X, and the Model Y. As we get closer to the year 2030, cars with ICE will be phased out, and new electric models will become available. That means that the heat is on for automobile manufacturers: both for the ones that are already on the market and for those currently emerging from the background.

The Tesla Model 3 Performance is the affordable car here, but it's also slightly less exciting. With 480 horsepower and 486 lb-ft (660 Nm) of torque, you'd tend to think that it's about to have a rough day ahead. But we should also consider the fact that it only weighs 4,071 lbs (1,847 kg), so that might come in handy for the challenge ahead. Up to 60 mph, it should be the faster car here, but a quarter-mile (402 meters) race is not bound to have the same outcome.

The BMW is off to a strong start, but the Tesla is quite close behind. As the speed increases, the difference in horsepower levels becomes obvious, and the i4 starts pulling away from its opponent. By the time they cross the finish line, you can't help but wonder if BMW engineers were particularly careful about making the i4 slightly faster than the Model 3.

For the second run, the Tesla takes control after the start, but this is only a short-lived victory. The German-built EV gets back into the lead and crosses the finish line in 1st place once again. According to the telemetry, the BMW i4 needed 11.9 seconds to run the quarter-mile, while the Tesla was only 0.1 seconds slower. Now, how will these two compare in a rolling race? How much is the weight difference going to count?

Starting at 30 mph (48 kph), the Tesla jumps into the lead, as expected. But as speed exceed 124 mph (200 kph), the BMW i4 overtakes its opponent, scoring its third victory of the day. For the next run, they start at 50 mph (80 kph), and this time they're more equally matched. Once again, the i4 M50 is just too much for the Model 3 Performance to handle, and the score is now down to 4-0. But you just know that the lighter car is bound to win the last test of the day: the braking test! 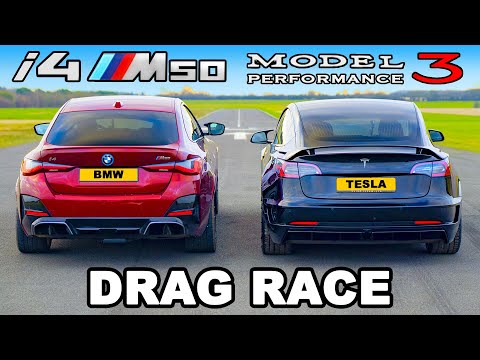