Back in the 1980s, the motorcycling trend was on a clear track and few were the ones who dared to hope for a machine that could offer both off- and on-road practicability. Up to that point, customers had to make clear decision when buying a motorcycle, depending on whether they wanted to travel in reasonable comfort on the established road network, or one that could conquer gravel paths, desert tracks or sandy roads. The Beginning

Home > News > Coverstory
10 Apr 2010, 00:11 UTC ·
by Alina Dumitrache
However, the moment that only some were hoping for came at the IFMA international bicycle and motorcycle show in September 1980, when the BMW Motorrad team took the matter into their own hands and introduced a new breed of motorcycles, one that debuted a new era in motorcycling: the R 80 G/S.

Contrary to what people thought at that time, the G/S in its designation referred not to “Gelandesport” (off-road sport) but rather its “Gelande/Straße (off-road/road) capabilities. In other words, BMW’s new machine was the first volume-production machine meant for universal use. 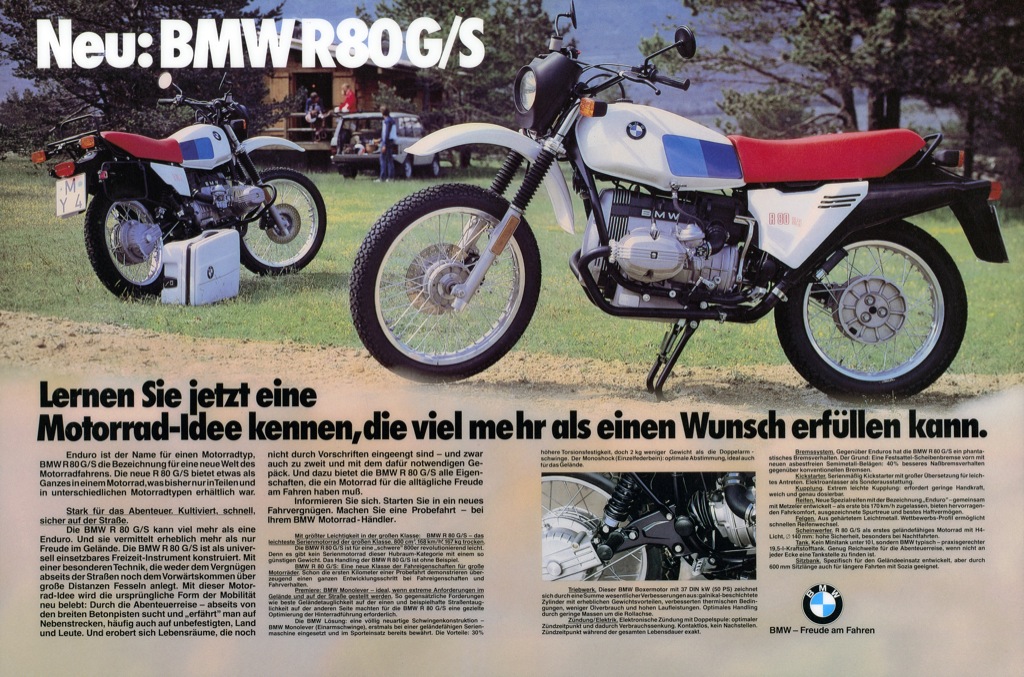 With the R 80 G/S, a new category was born then: the Reiseenduro (touring enduro). BMW’s new boxer model embodied off-road capability, active safety, easy cornering and touring comfort for two people and their luggage. And that was only the beginning... Today, more than 500,000 customers can vouch for the advantages brought by the GS models.

Here is what Karl Heinz Gerlinger, then head of sales and marketing at BMW Motorrad GmbH, has to say about that period:

“Part of the solution cam from within the walls of the development department, where a BMW enduro quietly took shape. A boxer with a single-sided swing arm – what a wonderful new creation! However, the sense of excitement was tempered by a host of questions. Can boxers really „fly? Is it possible to present such a large motorcycle to customers – credibly – as an enduro?” 1980 - R 80 G/S 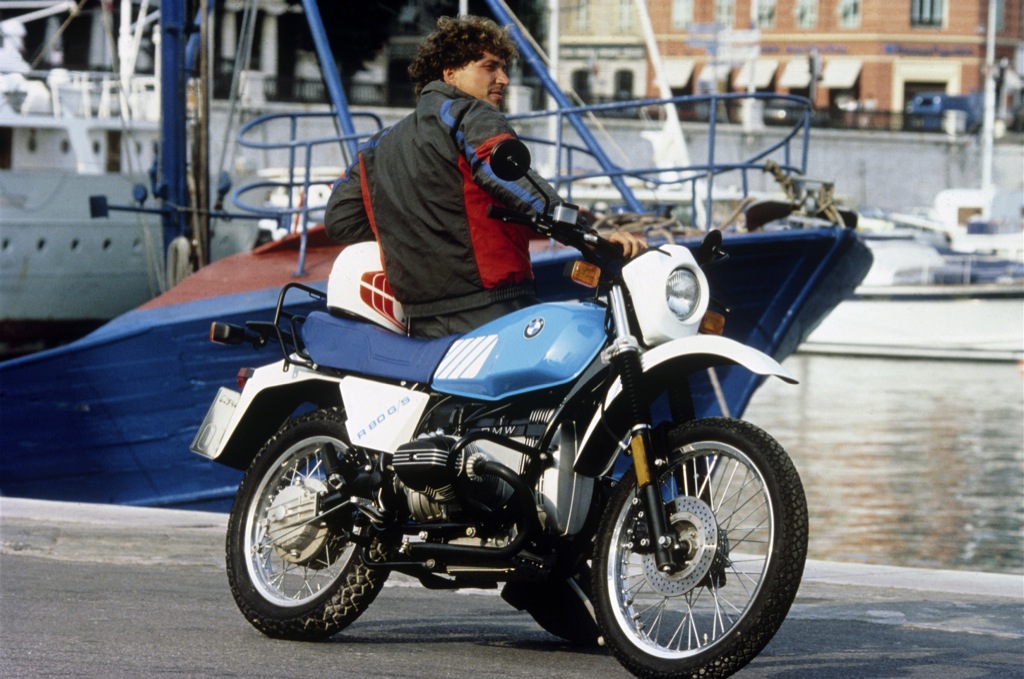 BMW promoted the versatility of the R 80 G/S with the words “Sports machine, touring machine, enduro… Welcome to a motorcycle concept with more than one string to its bow.” Catchy phrase we might say, considering the company delivered 21,864 units to customers by July 1987.

The R 80 G/S weighed some 30 kilograms less than the R 80/7 road model. Never before had there been an enduro bike with a disc brake. And never before had an enduro reached 168 km/h in tire approval testing, and developing up 50 hp from its 798 cc displacement at 6,500 rpm. Up to that point, motorcycles equipped for off-road use were not up for speeds of more than 140 km/h and never weighed more than 150 kg. 1984 - R 80 G/S Paris-Dakar
The “Paris-Dakar” edition was then released for general sale, its 32-litre fuel tank and a comfortable single seat with luggage rack (in place of the double seat) setting it apart from the standard G/S. The Paris-Dakar components were also available individually or as a kit. Almost 3,000 customers – in addition to the kit buyers – chose the 800 cc Dakar over the standard R 80 G/S. 1987 - R 100 GS
The engine on the R 100 GS was familiar from the previous year’s R 100 RS, only that the 980 cc unit delivered 60 hp at 6,500 rpm. The machine came with technical innovations such as a swing arm and telescopic fork, as well as marking the world 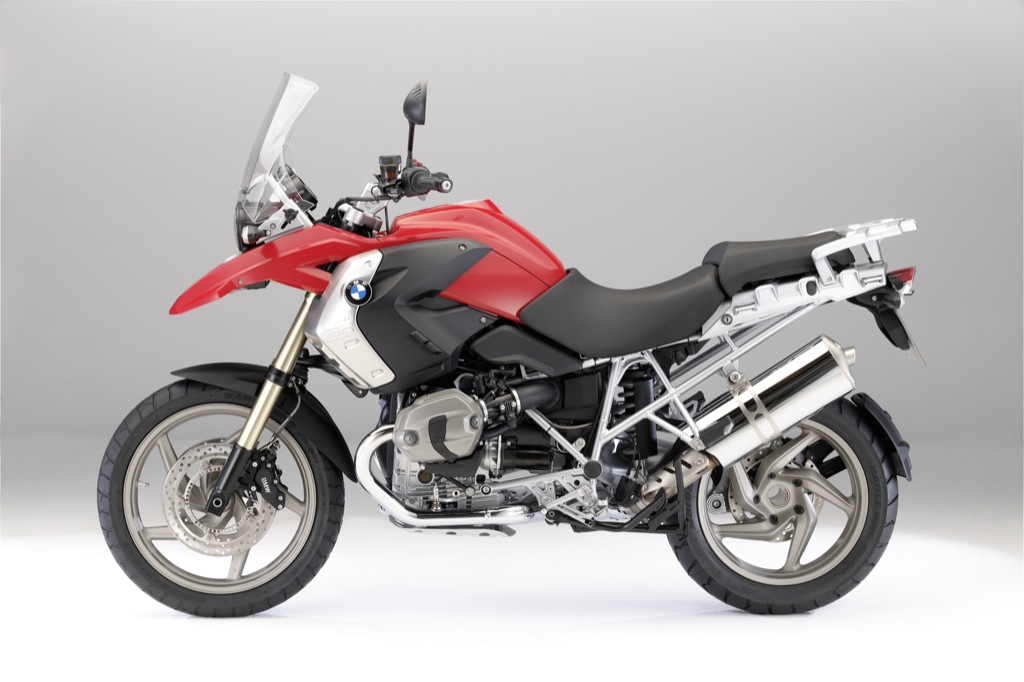 premiere of the cross-spoke wheels. They allowed the use of tubeless tires, and individual spokes could be replaced without having to take off the wheel or tire. BMW also upgraded the capacity of the fuel tank to 26 litres.1989 - R 100 GS Paris - Dakar
Similarly to the R 80 G/S Paris-Dakar, the R 100 GS Paris-Dakar included a 35-litre fuel tank with a lockable compartment on the back, as well as an engine protection plate complete with comfortable single seat. On the inner side of the fairing was an 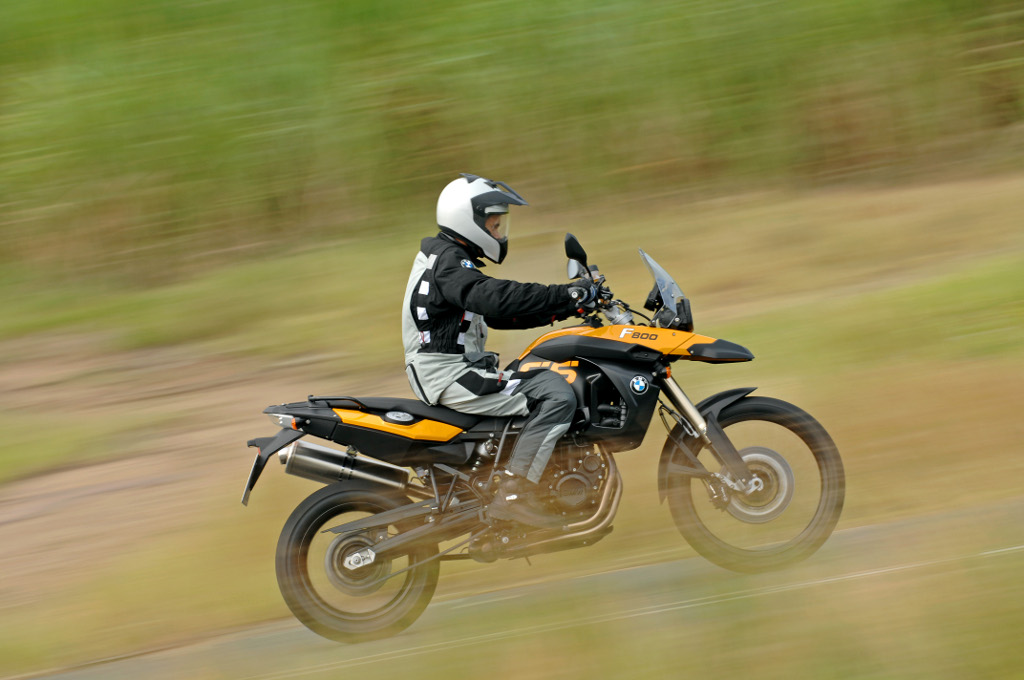 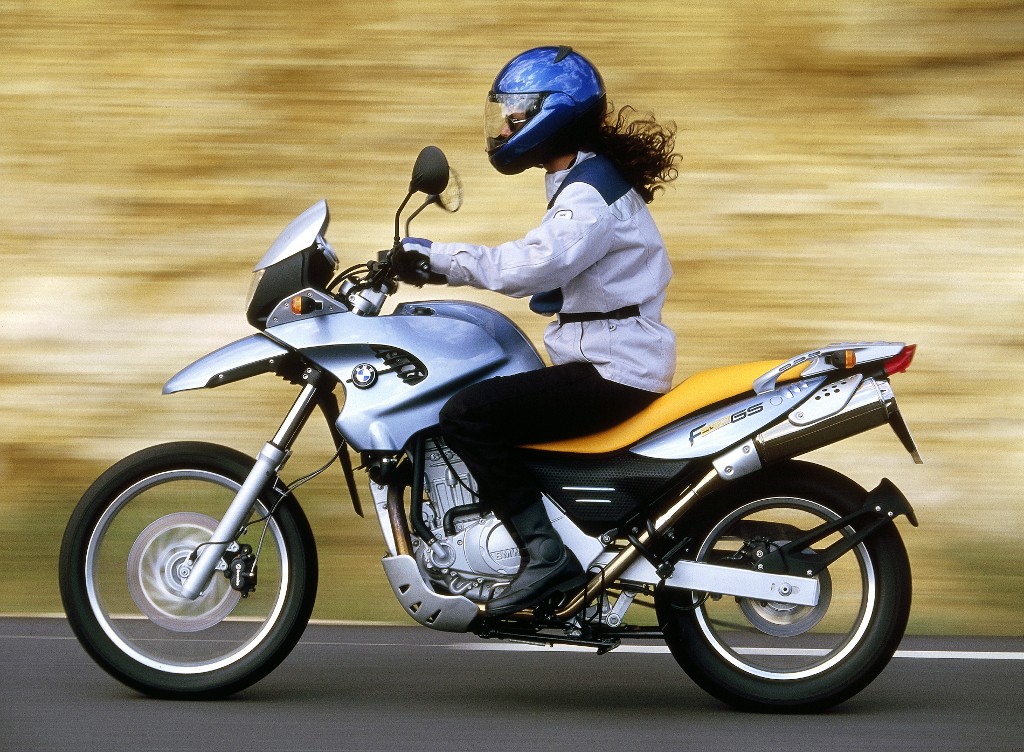 Thirteen years after the world's first touring enduro was launched, a new generation arrived, with the four-valve boxer engines, first fitted on the R 1100 RS, now powering the R 1100 GS. Electronic engine management, fuel injection, an increase in displacement to 1,085 cc and an increased gas flow rate produced 80 hp at 6,750 rpm, an increase over the previous two-valve models.

At the same time, emissions, noise and specific fuel consumption were reduced. The R 1100 GS was also the first enduro to be offered with optional anti-lock braking system, which was disengageable for off- road riding. with a top speed of 195 km/h, the bike had become the top favourite among BMW customers by spring 1994.

In 1998, BMW celebrated 75 years of motorcycle production, marking the occasion with a lavishly equipped anniversary edition of the R 1100 GS. 1999 - R 1150 GS
From a displacement of 1,130 cc, the R 1150 GS delivered a maximum power output of 85 hp, at 6,750 rpm. The cylinders and pistons were taken from the BMW R 1200 C, and the crank assembly and cylinder heads from the BMW R 1100 S. The package was completed by a more compact clutch, the six-speed transmission as used in the R 1100 S and a performance-enhancing exhaust system. 2000 - F 650 GS and F 650 GS Dakar
Both bikes retained the same overall concept as the popular F 650, but were bringing along new body styling and technical improvements. The single-loop frame was replaced by a perimeter frame and the twin carburettors were superseded by fuel injection. A three-way catalytic converter was fitted as standard, while the fuel tank was now fitted in the frame triangle, lowering the centre of gravity. The models remained in the range until 2007.2002 - R 1150 GS Adventure
Globetrotters went ecstatic when the Adventure version went on sale with its longer spring struts with travel-dependent damping, anodised wheels, large windshield, single-piece seat and sturdier oil sump guard. The machine was also available with a 30-litre fuel tank and an extra-robust aluminum luggage system, heated grips and improved ABS II. 2004 - R 1200 GS
Aside from the further increases in displacement (to 1,170 cc), torque (115 Nm at 5,500 rpm) and power (98 hp at 7,000 rpm), the R 1200 GS had a fuel consumption reduced by 8 percent compared to the R 1150 GS model, and was almost 30 kilograms lighter than its predecessor. Other innovations included a simplified cable harness, a standard- fitted flatscreen display providing information about fuel level, oil temperature, time and other data, and new fully sequential fuel injection with computer-controlled ignition. All these improvements helped the new model become the number 1 selling bike in Germany in 2005. 2007 - R 1200 GS facelift
The bike now features the six-speed transmission from the boxer-engined HP2 Sport street bike, with the powerplant developing 105 hp and 7,500 rpm. The seat and handlebars became more comfortable, while visual enhancements comprised light-alloy side covers on the fuel tank and by the failsafe LED rear light. Other innovations included the an ESA (Electronic Suspension Adjustment) system.2008 - F 800 GS
The new twin-cylinder model came to replace the F 650 Gs and F 650 GS Dakar, with the 85 hp 798 cc engine powering it up to the 200 km/h mark. The predecessor – single-cylinder – F 650 GS is still in production in Berlin and Brazil, but only for specific markets. 2010 - the GS at 30
The GS boxer engine received a sporty makeover, with two overhead camshafts per cylinder that resulted in improved rpm stability and volumetric efficiency and a more efficient combustion chamber design. The increase in output, to 110 hp at 7,750 rpm, was moderate, but it helped BMW maintain a high fuel efficiency level.

Now in its thirties, the GS have an impressive market share, being the best-selling motorcycle models in most countries. The touring enduro bikes have set a benchmark over the past three decades and point to a much longer success of the GS models.