Florin Tibu
The wait is over, the BMW G310R is here, and we will bring you live photos next week from EICMA 2015. The beginners who have been dreaming about a BMW motorcycle that would suit them and still be both fun and legal now have a very appealing choice added to the market.
96 photos

We knew that BMW was close to finishing the G310R when we saw the G310-based stunt bike, and it was obvious that the Bavarian maker would not miss the EICMA show. The G310R is the first step BMW takes on a path zie Germans have never explored until now.

The G310R is the fruit of BMW's partnership with the Indian manufacturer TVS, but in the Asian markets it looks like the bike will be sold with the latter's badge. Still, the G310R will be present in multiple international markets and this is what matters most now.


The smaller brother of the S1000R

If anything, the G310R reminds us of the S1000R roadster, but in miniature. The design cues are bold and will certainly look appealing to the young demographic, while the color schemes are just as BMW as the bigger bikes can brag about.

A machine built from scratch, the G310R is powered by an all-new 313cc single-cylinder DOHC engine that can produce 34 hp at 9,500 rpm and a peak torque of 28 Nm (20.6 lb-ft) at 7,500 rpm. The intake is positioned in front of the engine, thanks to a rotated head, and the cylinder is tilted backward.

BMW does not mention the transmission, but we can almost swear it is a 6-speed unit, helping the G310R effortlessly reach highway speeds when needed.

The unladen weight is 158.5 kg (just under 350 lb), and the strong tubular steel frame looks sturdy enough to accommodate even heavy riders. The swingarm is made of aluminum and has a spring strut mounted directly on it.

In the brakes department, the 2-channel ABS comes standard for the European markets, aided by a generous 300mm rotor in the front and a 240mm rear one. The upside-down fork is also sporty and modern, but we can't tell if the TVS version will retain it. A large LCD screen adorns the small front cowl and BMW says it conveys quite a lot of info on the bike and the ride.

The G310R is expected to offer a relaxed, neutral riding position. Still, the roadster DNA of the new machine will also allow riders to adopt a sportier one when laying the hammer down. Finally, the G310R comes with a seat that is 785 mm (31.9") above the ground, making the bike accessible to almost any rider.

Expect more on the BMW G310R as we hit Milan next week. 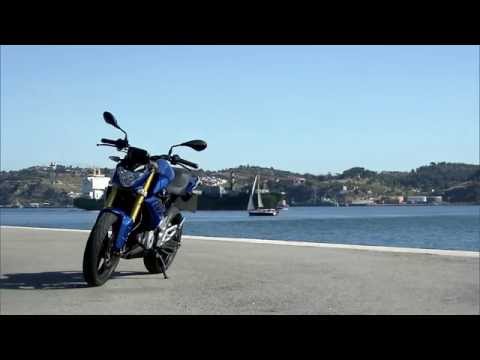