5 BMW 335i Pitted Against Cadillac ATS 3.6 and Mercedes-Benz C350 by MotorTrend
Up Next

Home > News > Car Profile
Gabriel Nica
The BMW 3 Series has always been the best seller in the German company's line-up. The Lexus ES also holds the best-seller award for the Japanese company so today we're looking at the two most sold cars from Lexus and BMW in a showdown.
1 photo
The guys from TFLCar tested the two in a head to head compariosn. However, these cars shouldn't even be compared. BMW's direct competitor from Lexus is the IS. The ES is more of a luxury sedan than a sports one. However, the guys decided to try them out and the outcome couldn't surprise anyone.

The Lexus is front-wheel drive, has a 3-liter V6 petrol engine that delivers 216 HP and is no match for the sporty BMW 335i that has the 306 HP 3-liter inline 6-cylinder turbocharged petrol engine and the xDrive system that sends power to all 4 wheels. Both gearboxes are automatic but the Bimmer has 8-speeds at its disposal whilst the Lexus has only 6.

The only part where the Lexus might be better than the BMW is the ride comfort. However, the 2 cars are in different segments and the Lexus is supposed to be more comfortable whilst the BMW is defined by the stiffness and sportiness of the ride it offers. Even the guys said that it's not an actual BMW if you don't go into sports mode to feel the road and its bends.

Overall, BMW wins but we not quite sure of what. It is a comparison of 2 different class cars and we'll just have to wait for a true comparison with the new IS to see whether BMW is still king of the sport sedan segment. 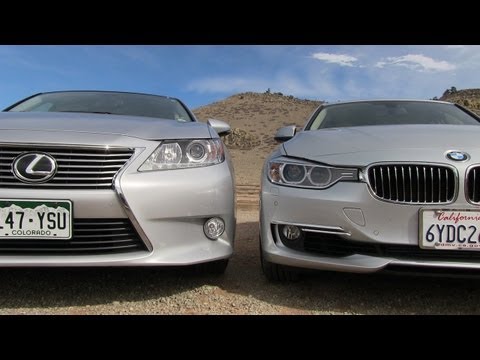