Gabriel Nica
What you’re about to see is a bit disturbing, especially if you own a BMW M5. In the video below you’re going to see a rather unusual drag race, between a sport sedan against a ... truck. And we mean truck, not an SUV.
1 photo
According to the video description, the M5 was going up against a tuned Kenworth W900 that puts out no less than 2,400 HP and 2,600 lb-ft (3,525 Nm) of torque thanks to same careful tuning from its owner that is quite renowned in Canada for his trucks, Sylvain Noel.

Now, those numbers might not look like much plainly written down like that but they are gargantuan in reality. We can’t get over how we almost ran out of breath when we drove the M6 a while ago and that car has only 680 Nm (501 lb-ft) of torque. This beast has 5 times more. Sure, the weight also plays a factor but the sheer power seems to have won the race here.

That’s because the M5 came prepared with only 507 HP and 520 Nm (384 lb-ft) of torque. While the power numbers are about 5 times lower on the BMW, the weight difference isn’t all that big between them. Factor in the multiple ratios of the gearbox on the truck and you might be surprised of who wins this drag race.

The video description says that the M5 didn’t use launch control and that would be fair because the truck surely doesn’t have such features. However, the race was much closer than we expected. Check it out! 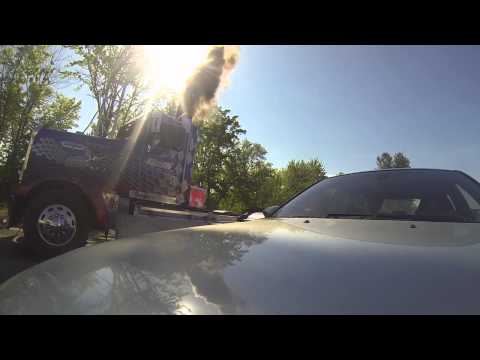