2 The Movie that Takes a Look at BMW’s Motorsport History Gets a Trailer: Adrenalin

3 BMW Teases Us with Video of Mysterious Upcoming Model

People think that cars like the M760Li or the Audi S8 plus aren't the real deal. But we don't agree - with so much luxury being taken for granted in the M6, you're never going to get real sportscar sensations out of it.
35 photos

So what do we think of the all-new M760Li with xDrive? Well, it really is the boss, at least in its segment. The S8 plus only has a V8, and it is a pensioner on its way to the retirement home. Meanwhile, the Mercedes-AMG S65 has an old V12 with turbo lag and only comes in rear-wheel drive.

Usually, we don't see the point of having all four wheels being powered, but that's kind of important when your car has a 6.6-liter V12 with twin turbochargers. So Mercedes might be missing the boat in the traction department.

If you care why BMW made the m760Li or why it's called that, check out the promo video below. As you can see from the screenshot we decided to make, there are two distinct models.

The regular one is the M760Li xDrive, which the presenter correctly describes as being "in your face." It's got a bolder body kit with gaping air intakes and wheels in the same style as the M6. We believe some brighter paint wouldn't hurt either!

However, BMW admits that some drivers might be looking for a more luxurious, discreet look. Which is why they have developed the V12 Excellence with the regular bumper and a polished grille. Considering they both have the same performance on offer, we'd buy the one that doesn't look like it's been tuned.

While critics will say that the M760Li isn't a true M car, we'd argue that nobody knows what that is these days. For example, there's not much connecting the M2 coupe to the lumbering M6 Gran Coupe.

And there's plenty to be enjoyed about the flagship of flagships. For example, its 610 PS engine gets you to 100 km/h in a brisk 3.7 seconds. And during the Geneva Motor Show debut in March, we were able to check out a beautiful frozen paintjob (check the photo gallery for that). 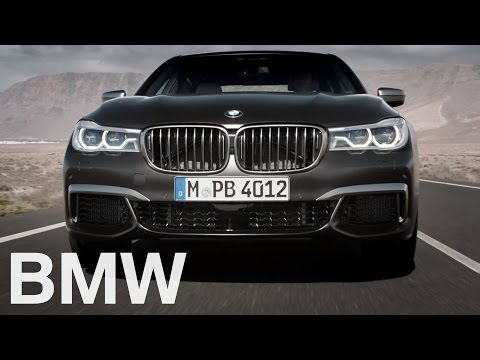