BMW Driving Experience: How To Manhandle a BMW M

Andrei Tutu
I’m gripping the Alcantara-wrapped steering wheel hard and, as my finger reaches for the downshift paddle, I realize that I hadn’t braked late enough. Here, the cones are milder, I could’ve earned a few sweet fractions of a second entering the rather wide left-hander at greater speed.
16 photos

Before I finish thinking about this, the walkie-talkie buried in the door pocket lets me know that Big Brother is well aware of what I had done, despite having watched me from a considerable distance. In case you want to know who Big Brother is, let me introduce Claudiu David, BMW Driving Experience Trainer.

He’s watching and, more importantly, listening to my every move, as I was invited to take part in a BMW Driver Training experience. It’s 8 AM and Claudiu is way more awake than me or any of us. 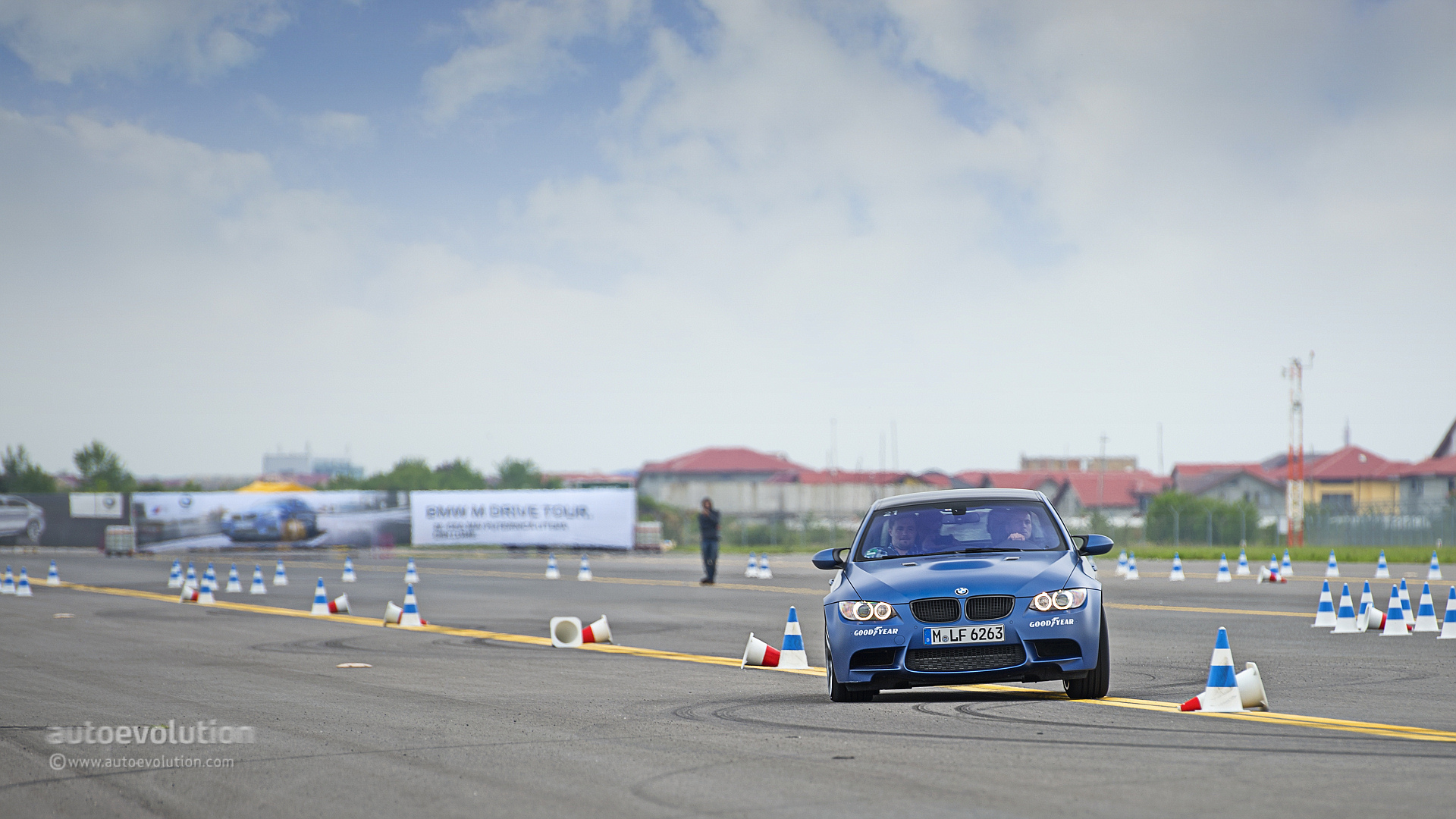 By the way, somewhere along our journey I should’ve spent some time to take you through the history of the BMW Driver Training, but I’m going to give you a few nice weapons for those discussions at the bar. The whole thing started out in 1978. Back then it was called BMW Driving Experience and it was the first driving school created by an automaker.

There's one more thing - did you know that Bob Lutz did quite a lot for BMW’s image in the US during the early 70s’? Yes, the man who is mostly known for his GM career was the one who gave an unexperienced agency his vote while working for BMW. His effort was rewarded with a motto that has become a synonym for the brand: “The Ultimate Driving Machine”. Good, now we can forget about the 70s'. This is 2013 and we’re here to drive. Hard. 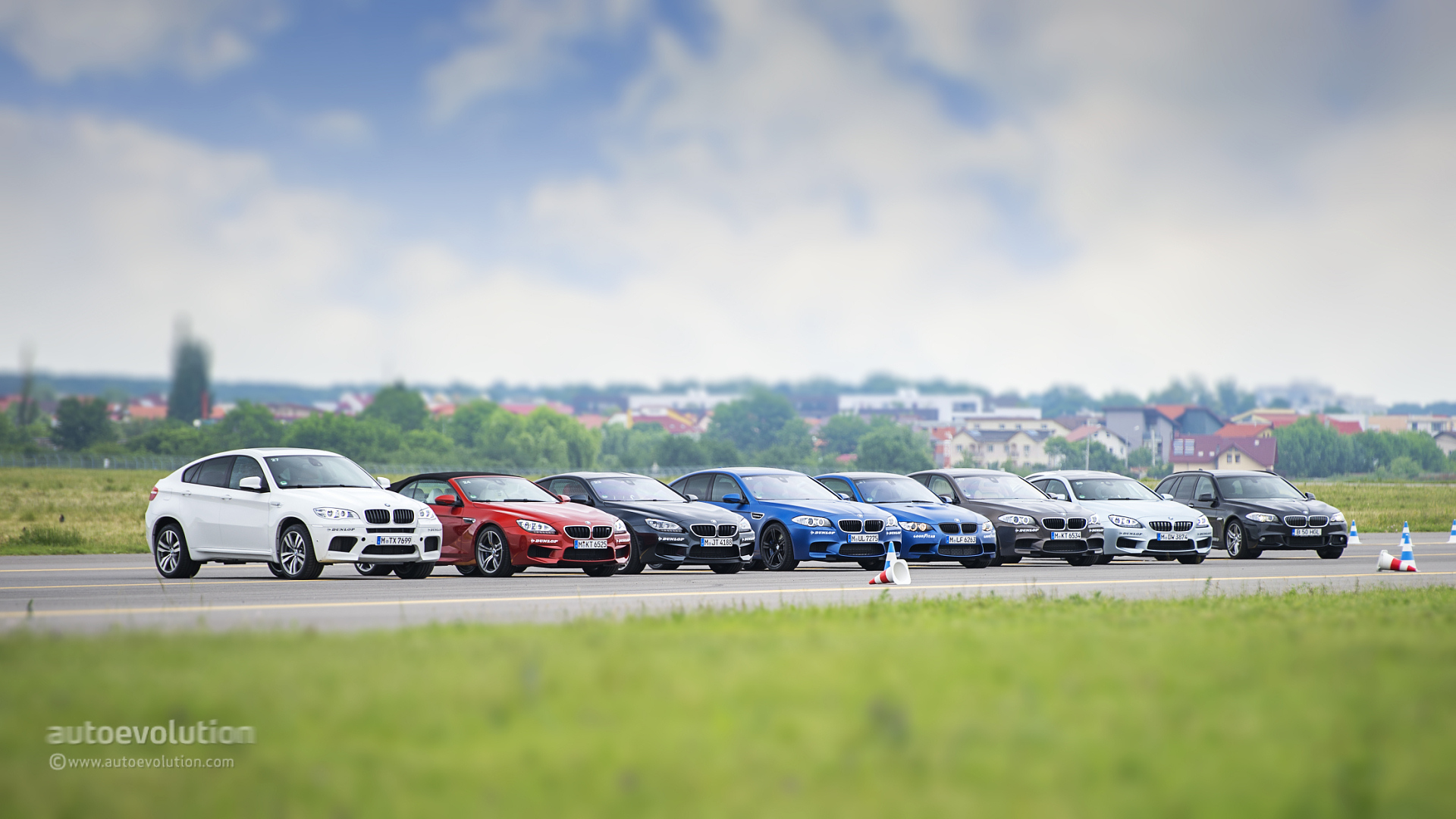 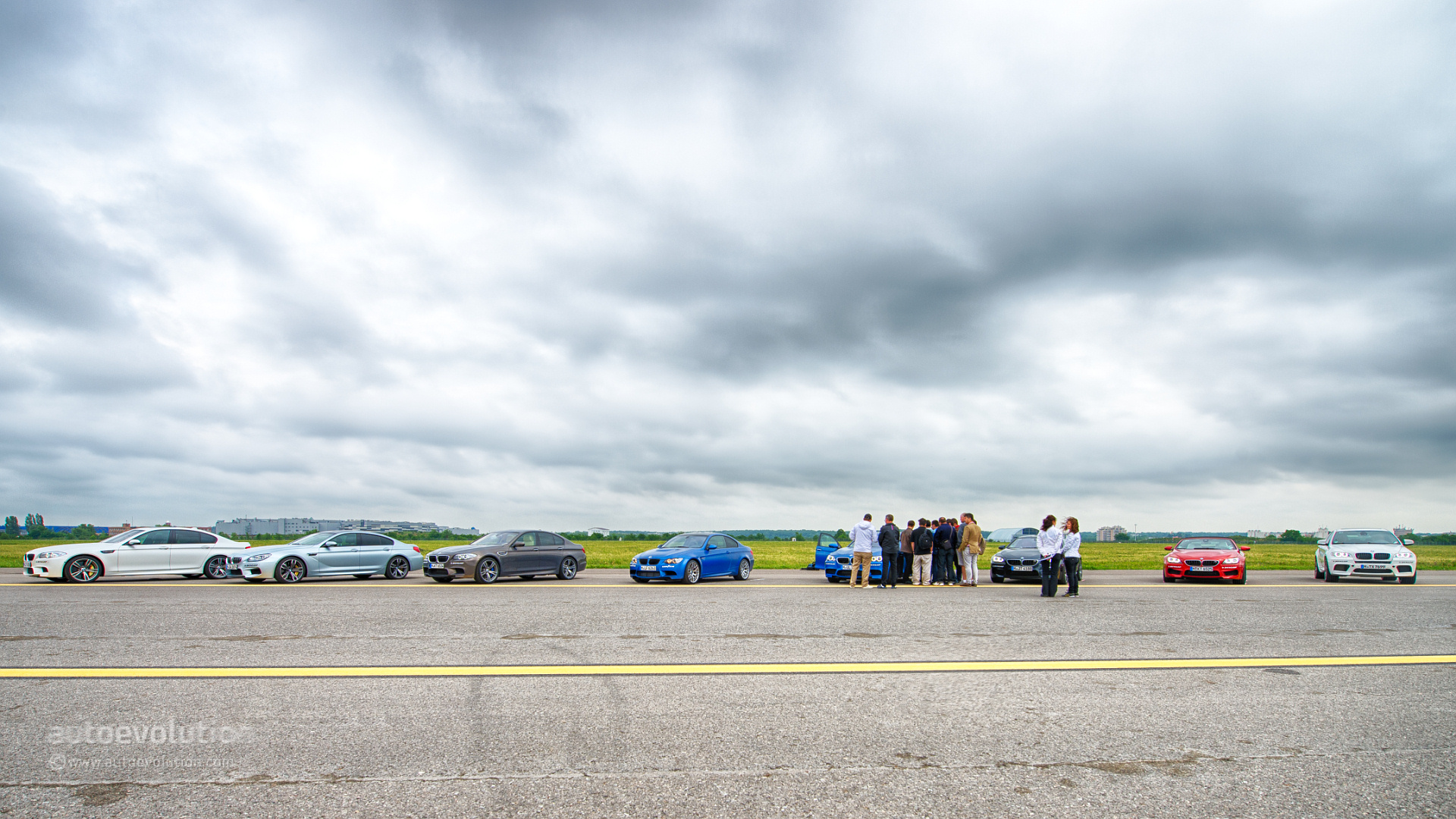 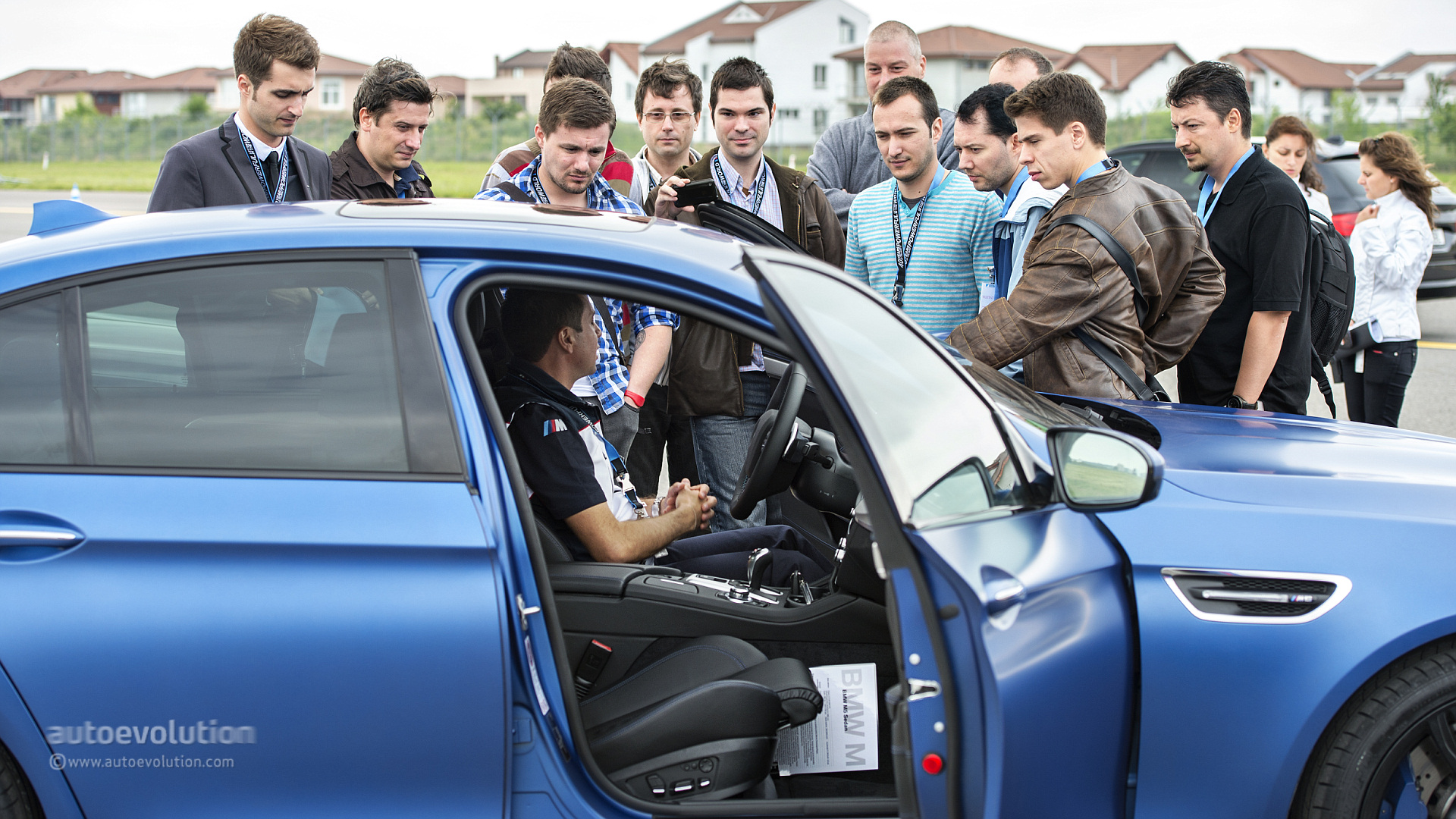 BMW has neatly lined up 4,335 HP on the runway of the Bucuresti Baneasa International Airport. The horses come in various BMW M shapes and sizes. The M3 Coupe, M5, M6 Coupe, M6 Convertible, X6 M and, of course, the newest addition to the range, the M6 Gran Coupe. After having waited in the back of a 520d Touring for 20 minutes due to a helicopter’s need to take off, I was eager to get some action, so I look the M5 in the headlights and head for the driver’s door.

I didn’t even blink when having to decide which car I’d be driving. The M3 is set to become history soon, so it’s naturally aspirated V8 was the... natural choice.

However, like I said, right now I’m heading for its big brother. Claudiu is waiting for us behind the wheel. The way in which we group ourselves around him before he even starts explaining reminds me of college, when people used to go to certain classes that didn’t even belong to their faculty, just for the infotainment. 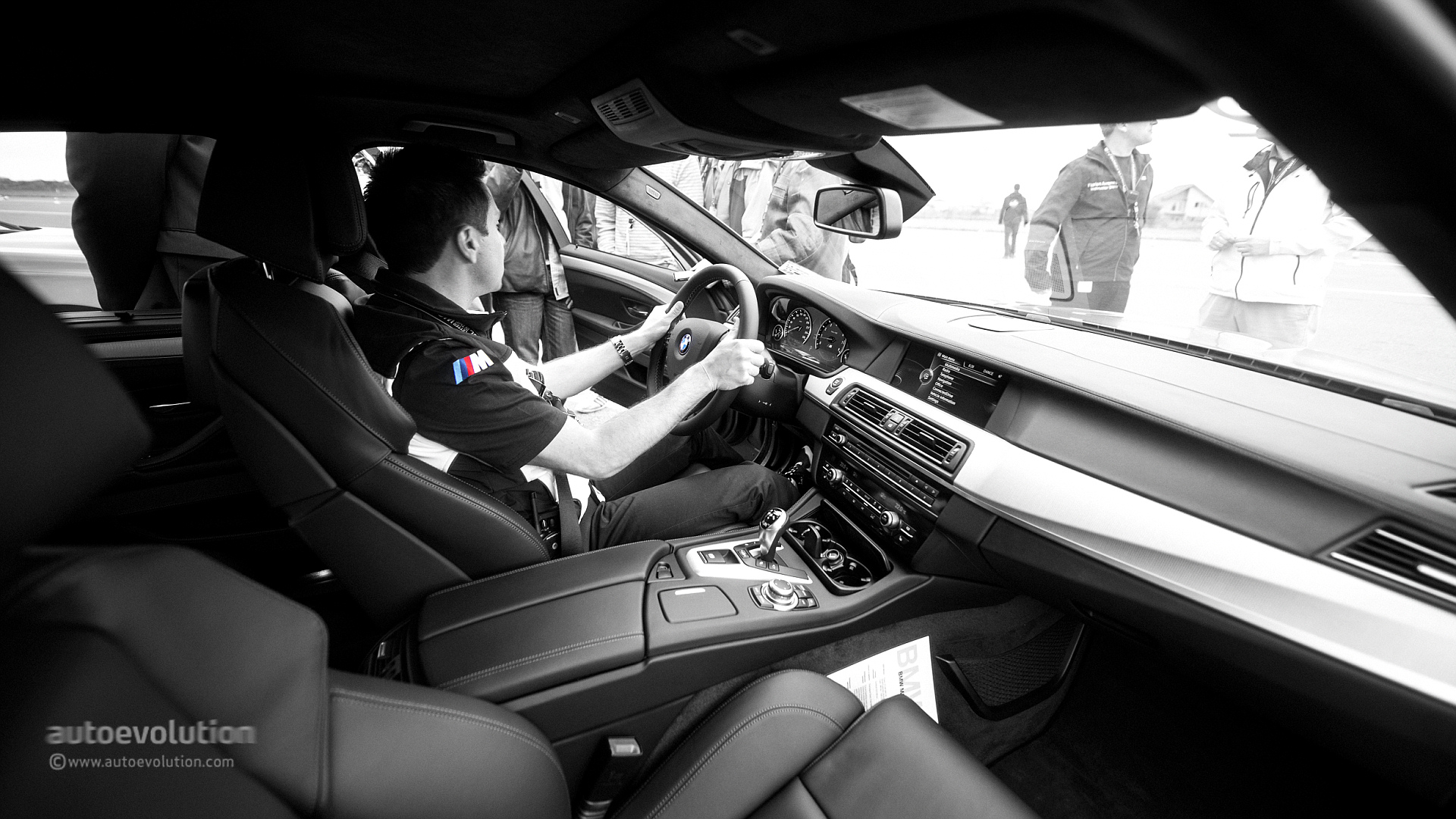 Nevertheless, there’s not time for memories, Claudiu’s sharp look is telling us to pay attention. It all starts with the driving position, this kindergarden discipline that many drivers miss. To put it shortly, it’s best to sit four or five fingers below the roofliner, 30-40 centimeters away from the wheel, to still have a knee angle when fully pressing the brake and to keep the backrest as vertical as possible.

It’s not hard to understand that, if you don’t listen to this advice, you seriously increase your chances of either losing time on the track or teeth on the road, or even both if you’re really unfortunate.

“The throttle application on the corner exit should be done with the same speed used for bringing the steering wheel back to the neutral position,” the BMW trainer explains.

A few other golden rules for making the most out of the magical thing called “Grip” follow and then it’s time for him to listen to us. “Define the apex,” Claudiu asks.

More or less accurate answers came - it was too early in the morning, the coffee had been bad, how dare he put us through the ordeal of answering such a question?

We move on to more serious business and he advises those of us who are not using left foot braking and trailbraking on a daily basis to forget about these for the begining, if we want to beat the stopwatch today. OK, so at first, nobody will be using the brakes for anything else than slowing the car down.