3 Widebody C5 Corvette With an Overhang Drag Wing, Gets Inspiration From the C5-R

Some say that German premium automakers became the boring Apple representatives of the automotive industry in recent years. Well, that is certainly not valid for BMW anymore.
19 photos

Though, perhaps many fans would have preferred it that way. Especially against recent alternatives like the 4 Series or the M3/M4 siblings. Plus, the decidedly polemic-inducing (and hard to pronounce) iX flagship EV sport utility vehicle. Now, another “good” – as in very controversial – an example would be the Concept XM.

Perhaps BMW saw what Tesla attempted to do with its quirky Cybertruck and decided to follow the same path. But then remembered the Chinese copycat woes and quickly retconned everything along the way into their physics-defying and mind-bending style. Well, their latest introductions are certainly something else...

Naturally, quirky as it may be, BMW’s Concept XM garnered a lot of attention. From both across the real world and the virtual realm. Thus, it fast became a darling of pixel masters. And love does not seem to subside even months after the prototype’s introduction. Perhaps they are all passionate about the plug-in hybrid setup with 740 horsepower... After all, they all modify the design beyond what BMW intended.

The latest interpretation might also be the most appealing yet. Not from the design standpoint. As some will also say the Concept XM styling is incorrigible (although we did see it morph into a yummy four-door coupe to spite Audi’s RS 7). But rather from the body style POV. As such, the virtual artist better known as SRK Designs on YouTube, has transformed the XM into a pickup truck.

Imagined as an “electrified hustle,” BMW’s Concept XM would certainly bode well for ducking it out with some of the high-end EV pickup trucks out there. One usual suspect would easily be Tesla’s notorious Cybertruck.

Besides, by all accounts, the Bavarians have enough time to release the production XM and then cook up a pickup truck version for it as Tesla is not in a hurry to release the Cybertruck into the wild... So, maybe it would be better off fighting the 2022 GMC Hummer EV instead? 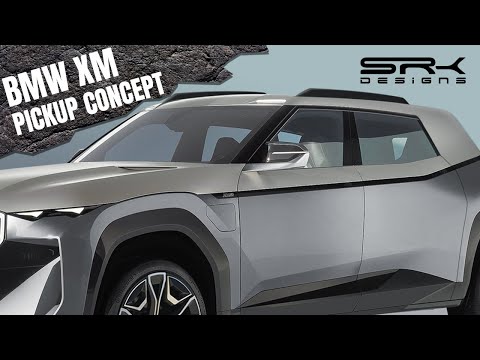