2 BMW Probably Hopes Christoph Waltz' Star Power Will Save the iX, We Bet It Won't

3 You’re the Problem If You Think the BMW iX Is Ugly, Says BMW

4 Designer Fixes the BMW iX Because, Let's Face It, It Needed Fixing

Home > News > U-turn
Elena Gorgan
One marketing misstep after another, these days, it seems like BMW can’t even put out a simple Happy New Year video message without stepping into a big pile of doo-doo.
54 photos

At least, that’s the buzz online right now. While the entire world was quietly celebrating the end of the terrible, most difficult 2020, BMW decided to do the same, while plugging the M2 Competition coupe. That in itself is standard practice in the industry (and elsewhere), so it’s not why BMW is making headlines today.

The reason for that would be the very odd and very controversial choice of “stealing” the engine sound from another carmaker. Put it differently, for the video message that featured the M2 Competition, someone working for BMW decided to dub the sound of a Lamborghini V10 over the real one, most likely thinking no one would be able to tell the difference.

But many people did, so the topic started trending after it was posted on (where else) reddit. BMW has since pulled the ad, but not before BMW USA shared it on various social media platforms. As of the time of press, certain dealerships still feature it on their social media.

In the video, a blue BMW M2 Competition is shown at the race track, doing smoky burnouts. As the camera zooms in on the odo and we see 2020 shift into 2021, the roar of the engine picks up. It’s clearly dubbed over, which, again, would not be entirely unheard of, but this is no sound an M2, with its 3.0-liter twin-turbo six-cylinder engine, ever made.

As Robert Mitchell says in the video below at the 2-minute mark, BMW has gotten to a point where it can’t even wish customers a Happy New Year properly. This comes after the OK Boomer marketing mishap when BMW aggressively shut down criticism of the iX on the grounds that only old people disconnected from reality would find it ugly.

In all fairness, this wasn’t entirely BMW’s fault – not if you consider that the video was put together by an affiliate marketing agency. But it was released to represent BMW on an international level, and no amount of pretending like this snafu didn’t happen will make customers forget that it did. 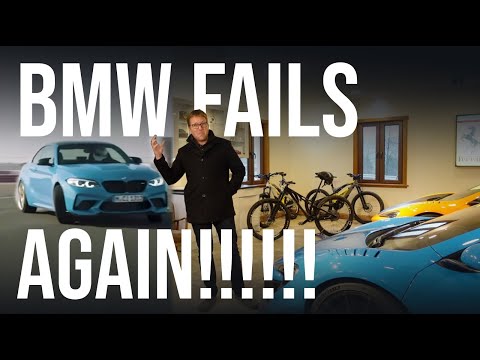