People seem to have been modifying their cars from the moment they were invented. Aftermarket aficionados are usually looking for enhanced styling, more performance, increased handling, or all of them at once. Naturally, automakers took notice and decided they wanted a piece of the action for their own. Cue to BMW who is like a Swiss clock when it comes to new model introductions and their associated M Performance Parts enhancements.
25 photos

The latest batch from the catalog includes the usual variety of premium exterior and interior elements, alloys, and performance-enhancing parts – all specified according to the exact needs of the recently facelifted 5 Series as well as the feisty M5 and M5 Competition.

The company has also announced the market availability of the midsize models starting this month alongside the new family of M Performance Parts – though some specific elements might not be available directly after the launch of the updated 5 Series family.

Even more carbon fiber can be commissioned in the form of M Performance exterior mirror caps, an M Performance Air Breather in the front fenders and understated M Performance side sill attachments. The rear gets treated to the Carbon or Pro Carbon spoiler alongside a new rear diffuser.

Moving inside we can find new additions such as the sportier steering wheel with Alcantara inserts, an even more luxurious version fully clad in M Performance carbon/leather or carbon/Alcantara trim, or the Pro version which is reserved for the M5 / M5 Competition.

The M Performance carbon shift paddles can be associated with any of the steering wheel options while the carbon M Performance gear shift is again exclusive to the performance models. The latter can also benefit from the lowered stance brought with the M Performance sports suspension (no damper settings are changed, though).

By the way, the coilover option drops the M5 and M5 Competition between 5 and 20 millimeters. Safety is enhanced via the optional sports brake system and the looks get a nip and tuck thanks to the 20-inch forged alloys that also sport a Ferric Grey matt finish on the Y-spoke design. The 5 Series get their own wheels – dual color 20-inch forged multi-spokes along with dedicated exhaust systems for the diesel powertrains. 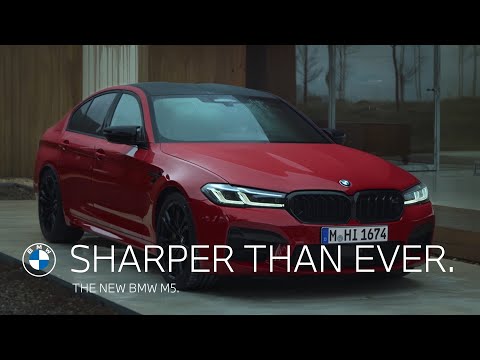