5 Dover White 1956 BMW R50 Was Extensively Restored Inside Out, Looks Fit for a Museum
Coverstory

Mircea Panait
Seven years ago, during the 2015 edition of the Concorso d'Eleganza Villa d'Este, a rather audacious design study was revealed. BMW paid homage to the 3.0 CSL with the 3.0 CSL Hommage Concept. A one-off masterpiece, the carbon fiber-bodied coupe also shows how important the past can be in determining the Bavarian automaker's future.
31 photos

Teased a couple of months ago, the 3.0 CSL Hommage special edition is extremely close to its grand unveiling. The Bavarian automaker is currently testing the M4-based model at the world’s most demanding racetrack, and from the looks of it, an extremely capable corner carver is on the horizon.

Alternatively referred to as M4 GT/H, the 3.0 CSL Hommage is a fair bit different from the concept. From the look-at-me rear wing to the roof spoiler and the intakes up front, it’s pretty clear that we’re not dealing with just another coupe. BMW has even refrained from enlarging the kidney grills, although the E46-gen M3 CSL is a great deal better executed in this area.

Developed to celebrate the 50th anniversary of BMW Motorsport GmbH, currently known as BMW M, the 3.0 CSL Hommage sounds pretty darn good thanks to a six-cylinder lump augmented by a couple of spinny lads. Based on the B58, the M-tuned S58 is offered in three specifications at press time. The limited-edition M4 CSL cranks out 543 horsepower and 479 pound-foot (650 Nm) of torque, and it tips the scales at 1,625 kilograms (3,583 pounds).

As opposed to the ZF 8HP eight-speed automatic in the M4 CSL, the M4-based 3.0 CSL Hommage is rumored with the ZF S6-53 six-speed manual. Listening closely to the upshifts and downshifts of the camouflaged prototype confirms that three pedals are in the offing, which is great news for BMW M enthusiasts. People like you and me won’t be able to enjoy the 3.0 CSL Hommage, though, because only 50 will be reportedly produced. 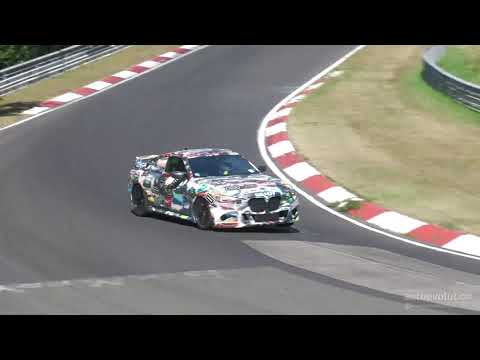