5 This Tonka Truck Made Neighbours Turn Yellow When They Saw It
Car video reviews:
Space Junk

Home > News > U-turn
31 May 2022, 17:39 UTC ·
by Ancuta Iosub
Shelby American celebrated the 50th anniversary of the Ford Racing 289-powered Cobras in 2014 with a limited edition FIA Continuation model. Only 50 units of the 289 FIA Cobras were ever built, one of which can be yours since one is listed up for auction.
13 photos

The original Shelby Cobra 289 was built in 1964 and became the queen of the race tracks throughout the 1960s, leaving behind race cars from reputable brands like Corvette, Jaguar, Aston Martin, and Ferrari.

The Cobra CSX7000 289 FIA model is a genuine continuation of the original race cars, retaining everything from the authentic style suspension to the elegant, curvy bodyline. Each car in the limited edition batch was built to order and delivered as a rolling chassis, less drivetrain, with a Shelby American-issued MSO.

One such model showed up on Bring a Trailer’s website and comes with just 500 miles on the five-digit odometer. It was ordered by the current owner as a rolling chassis from Nevada Classics, and drivetrain installation and completion were carried out at Shelby Parts and Restoration of Green Bay, Wisconsin.

Finished in Viking Blue paint, the fiberglass bodywork is adorned with white number meatballs and a red FIA-style nose stripe. The race car is powered by a 363ci Ford V8 engine featuring four two-barrel Weber carburetors. Power travels to the rear wheels through a differential with a 3.73:1 gear ratio. The V8 engine, built by Todd Goodwin of Goodwin Racing Engines in Wisconsin, features a Dart four-bolt aluminum block.

On the inside, the continuation Shelby Cobra is just as stunning as on the outside. The driver and passengers get to be hugged by bucket seats trimmed in elegant black leather. Matching door panels and wool carpets complete the classic look. While grabbing the wood-rimmed three-spoke steering wheel, the driver will be able to see an aluminum dashboard housing Stewart Warner instrumentation.

The Cobra is being sold with a black tonneau cover, a binder containing build documentation, as well as a clean Kansas title in the seller’s name.

So do you fancy an open-top ride for the summer holidays ahead? Go ahead and place a bid. This Shelby Cobra CSX7000 289 FIA would be the pride of any collector’s fleet. More so knowing that Shelby cars have long been considered blue-chip investments.

Original Shelby Cobras fetched upwards of $1,700,000 in the past at auctions, but the continuation models are more accessible. The current bid for this particular model stands at $151,000, so you still have a chance to roll down the roads in style this summer in an open-top flyer. 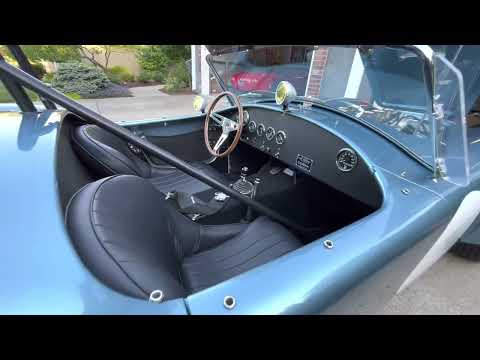