3 Blue Origin's Race to the Stars

4 Book Your Vacation in Space with the World’s First Space Travel Agent
Car video reviews:
Up Next

Spyshots: Porsche Preparing 911 GT3 Cabriolet as Speedster For the Masses

Jeff Bezos’ Blue Origin space company conducted on Wednesday the 9th flight of the New Shepard suborbital rocket, one meant to test of the escape motor fitted on the astronauts' capsule.
1 photo
The test was required to insure that future astronauts of opportunity could escape safely should something go wrong. The New Shepard took off from West Texas and soared towards the sky. Shortly after launch, the escape motor on the capsule ignited, separating from the booster.

The leftover rocket continued its flight until it landed safely, while the capsule deployed its parachutes and did the same some distance away.

“The Crew Capsule was pushed hard by the escape test, and we stressed the rocket to test that astronauts can get away from an anomaly at any time during the flight,” said Blue Origin.

“The mission was a success for both the booster and capsule. Most importantly, astronauts would have had an exhilarating ride and safe landing.”

New Shepard, named after the first American astronaut in space, Alan Shepard, is meant to be one of the transport means that would take tourist to space or NASA and other nations’ astronauts to the International Space Station (ISS).

The spacecraft is made of a capsule and booster rocket that launches vertically from a pad. 150 seconds after launch, the booster engine cuts off, and the capsule glides into space.

When fully operational, the capsule would serve as a research facility as well. Blue Origin says it is ideal for studies in microgravity physics, gravitational biology, technology demonstrations, and educational programs.

When humans are allowed onboard, six of them will be able to fit in a space ten times larger than the one Alan Shepard had on his Mercury flight in 1961.

New Shepard is one of two vehicles under development at Blue Origin. The second one is the New Glenn, named after the first American astronaut to orbit the Earth, John Glenn. According to Blue Origin, the system has more than twice the volume of any 3-stage rocket commercially available.

Wednesday's launch is available in the video starting minute 35:00. 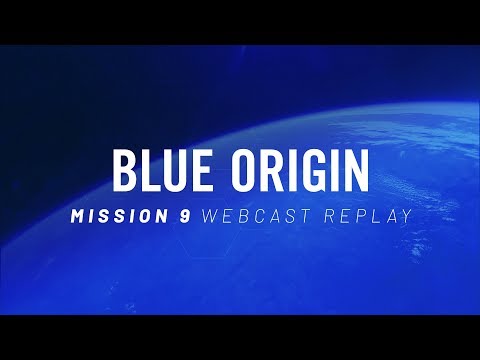