2 Add Driving an SUV on the List of Bear Necessities

Talking about autism spectrum disorders (ASD) is a touchy subject, and that's because, as the "spectrum" in the name suggests, they can range from mild affections that have little impact on the person's social life to a lot more severe ones which require constant care and surveillance.
1 photo
The latter is every parent's worst nightmare, but as this wonderful father-and-son couple you are about to see demonstrates, having this disorder doesn't automatically mean the end of the world. Nor does it mean you can't still have laughing-out-loud fun.

That seems to be truer than ever when the father is the owner of a Subaru WRX STI and a sports car enthusiast. Well, as it turned out, Spenny - the autistic son who is also visually impaired - also shared his father's passion for loud cars that go fast. His father, Omar, noticed that, so he started taking Spenny along in the car.

Not happy with a passive role, the son wanted to do more so Omar taught him how to change gears. "Over and up," says Spenny as he engages first gear, thus revealing how the tuition process unfolded, and the two set out in what has to be the most beautiful scene we've seen in a long time.

The bond between the two is amazing, and the pure joy that helping his father and being an active part of the ride bring on Spenny's face can be overwhelming. That anticipation as the boxer engine revs up and the son knows he is about to put the gear selector into second ("over and down") - if that doesn't move, nothing will.

Click on the video below at your own risk as you're almost guaranteed to suddenly "get something in your eye." It's one of those sights that have your emotions mixed up: you feel like laughing along and crying at the same time. Don't worry, both reactions are fine. 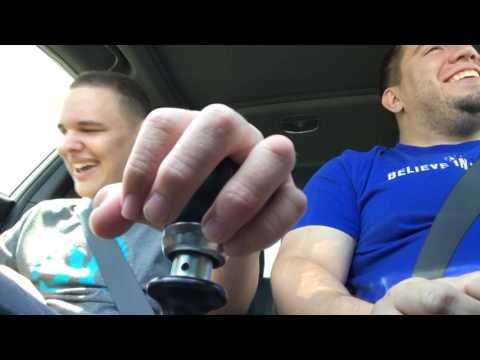