3 Blast From Bentley Blower Past: First Handcrafted Prototype Is Coming to Life

4 Blast from the Past: That Time Lexus Put Ice Wheels on the NX to Show Off

5 Blast From the Past: The Pontiac Ghost Car, the First All-Transparent Car
Car video reviews:
Coverstory

Blast from the Past: “You Can’t Park There, Sir” to Guy Crashed in a Ditch

Most of us wouldn’t even dare to drive up to a man at the wheel of a car that’s obviously stuck in a ditch on the side of the road and start pestering him with silly questions but, then again, most of us aren’t British.
1 photo
Dubbed the most British exchange / piece of banter ever to take place outside of Monthy Python, this incident is actually dated to early 2019. However, it recently reemerged online and on social media and is picking up traction again, so why not have a laugh with it.

The context is easy to infer based on the video: there’s a guy in a blue Peugeot that, for whatever reason, drove off the road and straight into the ditch. You won’t learn until the end of the video, but his missus is right there with him, in the passenger seat – and she is the only one to have suffered in the “crash” since she banged her head.

The man filming the video is in another car, which just happens to drive by the Peugeot. He reverses to the scene and starts asking the driver questions. It’s pure hilarity – unless you’re on the other side of the fence and think the dude is a straight-up douchebag for nagging a man who’s already in a spot of trouble.

“You can’t park there, sir,” the man tells the Peugeot driver, presumably after he realizes the crash wasn’t bad. “You’re on a concrete road, a thin narrow back-lane,” he tells him when asked what road they’re on so he can pass that information to the police. You see, he’s on the phone with the cops, presumably to report the incident.

The smartass continues, zinger after zinger, much to the driver’s exasperation. “Push It Right In The Ditch Road, it’s called,” he says, asked about the name of the road. When the driver says he doesn’t have drugs or alcohol on his person, he asks “What about in your system?”

Perhaps the funniest part is not the way in which the man filming cracks jokes at the other’s expense, but the sheer patience and calm that man displays when harangued this way. Imagine this exchange taking place in any other country, and we’d have another violent road rage episode to talk about.

That said, enjoy! A classic. 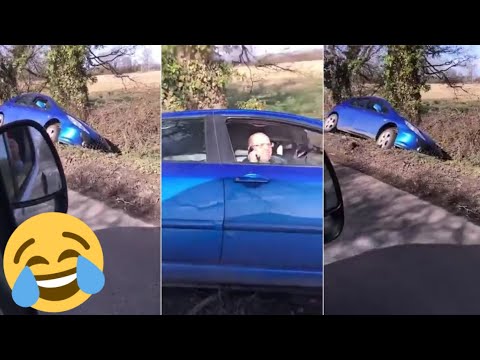