1 Blast From the Past: A 2003 Ford Crown Victoria and the Fastest Drive in Reverse

2 Blast from the Past: “You Can’t Park There, Sir” to Guy Crashed in a Ditch

3 Blast from the Past: That Time Lexus Put Ice Wheels on the NX to Show Off

4 Blast From the Past: The Pontiac Ghost Car, the First All-Transparent Car

5 Blast From the Past: The Backwards Brain Bicycle, the Bike You Can’t Ride
Coverstory

As February is winding down, so is autoevolution’s virtual all-truck party known as Truck Month. So let’s wrap it up with another episode of Blast From the Past, in which we honor the record-shattering ramp jump by Bryce Menzies: the longest pickup truck ramp jump in the world, as certified by Guinness.

For a blast from the past, we won’t really go that far. The record was set on August 25, 2016, during rehearsals for a Red Bull TV show but, of course, there was absolutely nothing random about it. With Menzies at the wheel, an experienced Red Bull off-road racer and champion, his pro race truck made a ramp to ramp jump that saw him launch precisely 397.4 feet (115.64 meters).

The location was Bonanza Creek Ranch in Santa Fe, New Mexico, or what Red Bull describes in the caption to the video below as a “ghost town.” This isn’t technically a ghost town, but a massive movie set in the middle of nowhere, which includes two ponds, two home sets, and one entire movie town.

The jump was included on the TV special Bryce Menzies New Frontier Powered by Pennzoil Synthetic, which aired on NBC shortly after the new World Guinness Record was set. For the jump, Menzies drove a Pro 2 truck with 900 hp and 750 lb-ft (1,015 Nm) of torque, with the motor oil supplied by–you guessed it–Pennzoil Synthetic.

It was Menzies’ idea that set the wheels of the project in motion.

“I had the idea for this jump because it’s just something that I’ve always wanted to do. Ever since I was a kid, I’ve loved jumping things – dirt bikes, buggies, whatever,” he said at the time. “And as an adult, I’ve really wanted to see how far I could jump my race truck. We race all the time, but we never get to come play on jumps like this, so it’s awesome that Red Bull and Pennzoil are behind me and making this whole thing possible. I’m just looking forward to doing it and really having fun in the process.”

By the looks of it, the fun was had and history accordingly written. 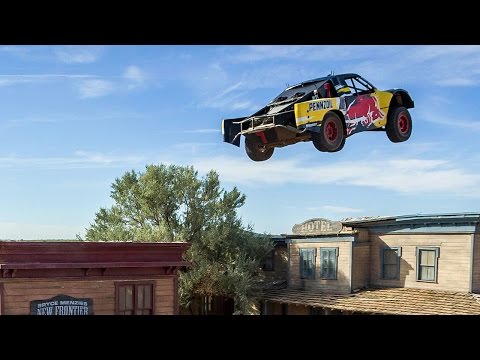