2 World’s Most Expensive Superyachts, Abramovich’s Eclipse and Solaris, Moving Out of Reach

Blade-Shaped, $300 Million Motor Yacht A Has Disappeared in the Arabian Sea

The irony is not lost on this one: the very assets that Russian oligarchs once took pride in owning and were eager to show off are now being carefully stowed away, “disappeared,” and handed over to proxies to avoid seizure. Motor Yacht A is one such asset.
10 photos

Motor Yacht A is perhaps one of the most instantly-recognizable, famous, expensive, large, spectacular, and controversial (or perhaps disruptive is a better term) vessels ever built. It is the sister ship of Sailing Yacht A, the world’s largest sail-assisted yacht, both in ownership, design, and nomenclature. Unlike Sailing Yacht A, Motor Yacht A seems to have gotten away.

Both A megayachts are the property of Andrey Melnichenko, Russian oligarch, founder of EuroChem Group, billionaire, and, since the start of the war in Ukraine in February, officially persona non-grata. Included on the sanctions list in many territories, Melnichenko was the 91st richest man in the world in 2020, with an estimated net worth between $15.8 billion and $17.4 billion.

His most spectacular assets are disruptors in naval design: the $580 million Sailing Yacht A, seized in Italy in March 2022, and the $300 million Motor Yacht A, officially on the run. At about the same time Sailing Yacht A was being seized, Motor Yacht A went dark, turning off AIS tracking, which makes it “invisible” to authorities.

Sailing under the flag of the UK, the megayacht left Dubai on March 4 and last broadcast its location 76 days ago from the Arabian Sea, where it was traveling at a speed of 17.4 knots (20 mph / 32.2 kph). Even then, the port of destination and ETA were listed as unknown.

AIS (automatic identification system) uses transponders to provide the position, course, speed, and identification of the ship to coastal authorities and other vessels and is used for collision avoidance. Turning off AIS trackers is illegal, but it has become the last resort of Russian oligarch-owned yachts trying to travel in secret to friendly waters where seizure is not even a remote possibility.

Motor Yacht A is a 390-foot (119-meter) vessel designed by Philippe Starck and built by the Blohm & Voss shipyard in Kiel. It was delivered in 2008 and is the epitome of deconstructed modernism and understated luxury – from the upside-down, blade-shaped hull to entire walls decked in stingray hide leather or alligator skin, mirrored surfaces, and a custom tender garage that doubles as a lounge and a nightclub, depending on the occasion.

Performance-wise, Motor Yacht A is as impressive as it’s visually striking: powered by twin MAN diesel engines, it can reach top speeds of 23 knots (26 mph / 43 kph) and has a range of 6,500 nautical miles (7,500 miles / 12,000 km) at cruising speed. Perhaps more spectacularly is the fact that, even at top speed, the A hardly produces any wake. 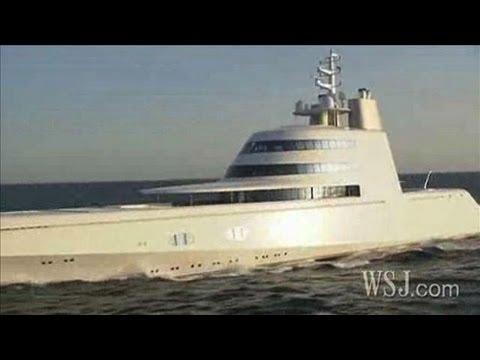