4 World’s Most Expensive Private Jet Is the “Floating Palace,” a Gold-Plated Boeing 747-400

5 Iggy Azalea’s Beef With American Airlines Is All Her Fault, Apparently
Coverstory

Billionaire Attorney Owns One of the World’s Largest Private Jets, a Gorgeous Boeing 767

Elena Gorgan
Work hard, play harder, because you’ll be able to afford it. And if you can afford it, you might as well knock if out of the park – like with an elegant and incredibly spacious private jet.
13 photos

John H. Ruiz is a Miami attorney, television star, business personality, an entrepreneur with a fortune estimated at over $50 billion by 2026 in net profit, after taking his company public in 2021. He started out as an attorney through the MSP Recovery Law Firm, a medical reimbursement litigation firm that he founded, and as the saying goes, has done a little bit of everything, including hosting his own TV show, La Ley TV.

Ruiz is now officially a billionaire but, as he said in an interview last year, “The money is good, but it’s not what drives me. What drives me is innovation.” Sure, you’ll say, how typical of a billionaire to boast that money doesn’t matter, when it’s all that everything boils down to.

Money might not matter (that much) for Ruiz, but it can surely buy the nicest and biggest private jet out there. You could probably count the people who own a Boeing 767, the fifth-largest Boeing aircraft ever produced, and have converted it into a private jet on the fingers of both hands, but Ruiz is among them. In fact, he’s just taken delivery of it, after purchasing it earlier this year.

Registered as N267JR, this is an older aircraft that’s been given a complete overhaul. It’s a Boeing 767-200(ER), one of the 121 units built and delivered. While it usually sat 216 passengers, this 159-foot-long (48.5-meter) wide-body aircraft will now seat a maximum of 33 people and sleep 17, because it’s been converted into a flying mansion. A mansion with two staterooms, two lounges, four bathrooms, a private cinema and DJ station, and a formal dining room.

The video below is of a complete tour of the aircraft, courtesy of real estate agent and vlogger Enes Yilmazer, who’s doing a bit of promo on behalf of the company that did the conversion, Florida-based VIP Completions. That would explain the overenthusiastic description of the size of the landing gear and the engine, and the many “I’m speechless” remarks, but even so, the work done on the aircraft is impressive.

According to VIP Completions, speaking with Business Insider last month, the remodel was done with direct input from Ruiz. The interior was customized to suit his “character and passions,” and he personally handpicked the color scheme, which is heavy on white, taupe, various shades of gray (though not 50 of them, like in that ridiculous book and movie series), and sable. After all, the aircraft is estimated at $38 million, so it would make sense for Ruiz to be involved in its remodel if he paid this kind of money for it.

The aircraft, which also features a stunning new livery that gives it a supercar vibe (though on a much larger scale), features two staterooms, one of which is the master bedroom and the other can be turned into a lounge. Both have their own bathrooms with double vanity with marble countertops, full-size shower with rain head, makeup station and the toilet hidden under the seating, and are decked in aviation-grade leather and suede. The master bedroom has its own private lounge, too.

Two more lounges are available as you move towards the back. The main lounge has a seating area with a gigantic U-shaped couch, a private cinema and DJ station with professional-grade audio, and a formal dining area that can seat seven people. The secondary lounge can seat eight people and is more of the “standard” variety, with seats and folding tables. A smaller bathroom is also located here, with another one at the front, for the exclusive use of the crew.

The aircraft has two galleys, a small one at the front, next to the crew seating area, and a professional-grade one at the back. The latter has everything from full-size ovens to a dishwasher, and it’s ready at a moment’s notice to cater to a large and super-fancy party.

In total, this Boeing 767-200(ER) offers 2,000 square-feet (186 square meters) of interior space, so it’s not comparable to an actual house just in terms of amenities and sophisticated finishes. Unlike an actual house, it can fly non-stop for 12 hours, and the only way us mortals could ever set foot on it is by means of a video tour. 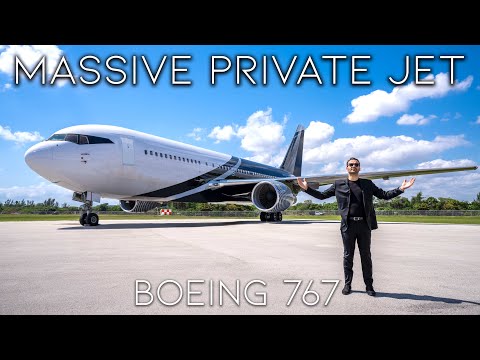