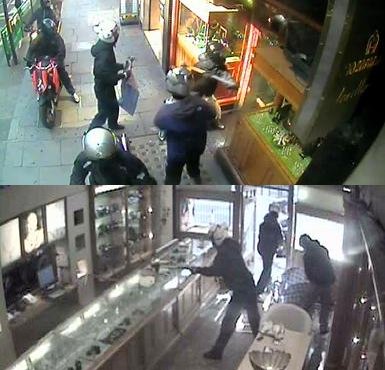 Some five months ago we were informing you on a jewelry theft in London involving a gang of bikers that was caught on camera by a CNN team. There haven't been any reports yet on the biker thieves being caught, so it doesn’t surprise us that another theft has been captured by the CCTV cameras in London the other day.

The footage shows how six motorcycles stopped in front of the Mozafarian jewelry store opposite Harrods in Knightsbridge and how they break into the store. The salesman pressed the panic button that alerted the police, but the officers did not arrive in time.

They couldn’t have, since it took the robbers, all wearing full face helmets with dark visors, just 39 seconds to steal £2m of jewels including one necklace worth £500,000. The damage could have been even bigger, but they failed to break their way into one display case containing further £3 million of gems. According to the store employee, they did not say a word as they raided the store.

The store’s salesman said that the robbers looked like they knew precisely what they were doing. “They were very professional, they knew what they were doing and where to go. Perhaps they sent a woman in earlier posing as a customer to check how the security door worked and location of the most valuable jewels.”

The incident could force owners to shut down the store. “We have considered closing the shop for good,” the salesman said. “It is not worth risking it, you only live once.”

Police reports mention at least 70 similar raids so far this year, strongly connected to each other. According to the Times Online, detectives think that these gangs are part of “Fagin’s Kitchen” of between 30 and 50 connected individuals, many of the them teenagers.