Bigger, Faster, and With Better Batteries. Nerva Exe Claims to Be More Than an E-Scooter

Large, impressively fast, and boasting a safer, more durable battery than most competitors, Spanish-made Nerva Exe promises to be “something more” than your average electric scooter.
14 photos

But its dimensions and weight are not the only ones making this electric scooter stand out. One other notable feature of the wheeler is its impressive speed, with the scooter behaving like more than just your relaxed, average urban commuter. Packing an electric motor with a rating of 9 kW of continuous power (and peak power of 12 kW), the Nerva Exe claims it can reach speeds of up to almost 80 mph (125 kph).

Moving on to one of the e-scooter’s best features, the Exe is powered by two BYD-made lithium iron phosphate batteries that total a capacity of 5.76 kWh. The batteries offer ranges of up to 93 miles (150 km) when using the scooter in its Eco mode, up to 71 miles (115 km) in the Normal mode, and up to 46 miles (75 km) in the Sport mode. It takes approximately four hours and 20 minutes to fully charge the batteries.

So what’s so special about LFP batteries compared to your average power cells? For starters, they are considered safer, offering increased fire protection. They are also more durable than traditional lithium-Ion cells, up to three times more long-lasting. In fact, Nerva claims that the batteries in its Exe scooter are guaranteed for 6,000 charge cycles. Moreover, Nerva says that the batteries have two lives, meaning that after they're done being used in the scooters, they get repurposed, being converted into energy storage modules that provide energy in photovoltaic projects in developing countries.

The Nerva Exe is equipped with a 15” wheel in the front and a 14” in the rear, comes with an integrated windscreen, a wide seat with enough storage underneath for a full-face helmet and a jet one, LED lights and indicators, and a 5” LED screen. A dedicated app that is compatible with both iOS and Android devices allows you to synchronize the Exe with your smartphone.

Nerva is yet to offer us information on the pricing of its Exe maxi-scooter and its launch date, but we’ll keep you posted. 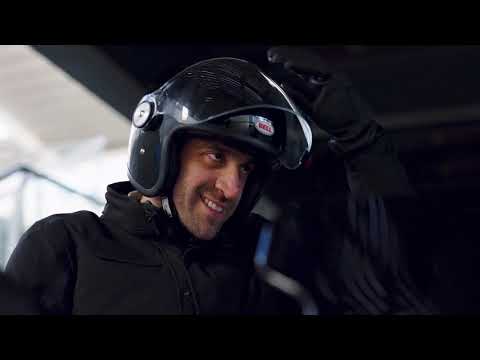