1 Life in a Tent on a Hand-Built Raft Is the Definition of Downsizing, Floating Off-Grid

2 SV Delos, or How You Can Live on a Boat for 13 Years and Make Money Off of It

What floats your boat? For Andrew Bedwell, it’s the thought of setting a new world record by the time he turns 50 and, as it just so happens, he will do it in a boat no bigger than a wheelie bin, a trash can.

Big C Challenge: One Man Will Cross the Atlantic in Homemade Boat the Size of a Trash Can

Andrew Bedwell is an experienced sailor and adventurer, so his resume is the very definition of impressive. But it’s his next feat that will earn him a place in history, because he will try to set a new world record for the smallest, single-manned vessel crossing of the Atlantic. He will do it in a boat he calls the Big C, that he built himself at home over the past three years, give or take a few days.

First things first, though. Earlier this month, The Big C started sea trials at Whitehaven, Cumbria, in preparation for her maiden (and only) voyage, scheduled to kick off in May 2023. Video of the sea trials is available at the bottom of the page: the Big C was launched to water, where it undertook stability testing.

Bedwell said the small vessel performed admirably, so he’s now looking forward to raising funds ahead of the journey. He has little success with that so far: as of the time of press, his GoFundMe campaign has raised just £900 of the £35,000 goal (that’s $1,099 out of $42,800), even though the the crossing aims to raise funds for cancer research. Bedwell needs the money for electronics, safety equipment, transporting the Big C to Canada, and fuel for an accompanying support vessel.

That’s not to say that Bedwell isn’t doing this for his ego, too. As his recent interview with the Daily Mail reveals, he’s always looking for the next big thing that will challenge him, and the Big C Atlantic crossing will do just that. The boat is just 1.4 meters (4.6 feet) long, made of fiberglass and foam, weighing 600 kg (1,323 pounds), and with room enough for him to sit down but not stretch his legs. Or to lie down in fetal position, to catch a 20-minute nap.

Because Bedwell won’t sleep through the nights on his big adventure, which he estimates will take 60 to 90 days. The boat moves slowly, at just 2.9 mph (4.7 kph), features a single-mast sailing rig and a plexiglass canopy that gives Bedwell about 40 minutes of protection against the elements before he suffocates.

The crossing will be something like being “stuck in a wheelie bin, on a rollercoaster for 90 days,” Bedwell jokes. And he’ll be hungry most of the time, because food rations consist of 1,000-calorie packages (protein bars and mush) molded onto the walls of the vessel, one for each day of the crossing. Bedwell will only take with him one set of clothes, no soap (but maybe a toothbrush), no music, no radio, and no distractions. In one small bottle of spice, he carries the ashes of previous record holder Tom McNally, whose boat design he used for the Big C. He promised his daughter he would scatter his ashes at sea.

On the same note, the Big C doesn’t have a toilet; it doesn’t even have toilet paper, because space is so limited. When Bedwell compares it to a trash can, he’s not only referring to its size. Unlike a trash can, the Big C has all the equipment allowing it to undertake the journey legally: AIS tracking system, VHF radio, rolling compass, two sails and two rudders, and a hand-pumped desalinization unit.

The 1,900-mile (3,058-km) journey will start from Newfoundland, Canada, and end in Cornwall, UK. Bedwell admits that his attempt is “crackers,” but is sure that everything will be fine. Assuming he raises the necessary funds by deadline. And doesn’t get hit by a tanker. Or a whale. Or gets caught in a big rolling storm. All these are some of the reasons for which Red Bull, famous for sponsoring all kinds of daredevil stunts, declined to back him.

All jokes aside, it takes guts to be this “crackers.” The money Andrew Bedwell raises with his Big C Atlantic Challenge will go to cancer research – another tribute to McNally, who passed away from kidney cancer. 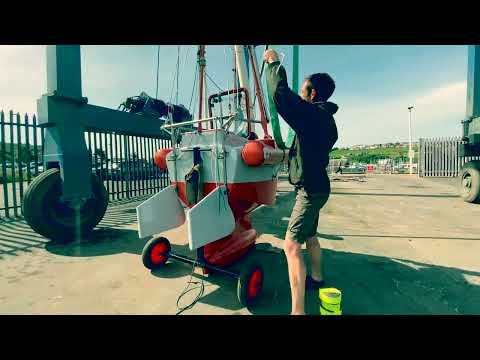 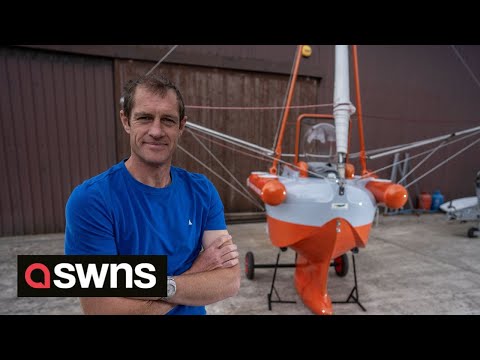