2 Ben Simmons Loves Italian Exotics So Much, He’s Got a Whole Bunch Laying Around

5 Zion Williamson Is All Smiles Next to His All-White Mercedes-AMG Duo
Car video reviews:
Up Next

Lamborghini on Snow Tracks Is a World First, Also a Bad Idea

Bieber's Strange Rolls-Royce Gets Criticized and "Fixed" by YouTube Designer

Last week, a custom-built Rolls-Royce Wraith went off like a bomb. There was literally no corner of the car-loving world that didn't get exposed to Justin Bieber's one-off, which is a testament to its powerful visual impact. But just because something is bold doesn't mean it's automatically good.
6 photos

The car did its job, getting Bieber some attention and reminding everybody West Coast Customs is still in business, making crazy stuff. It looks way more ambitious than any recent celebrity project, and we have to support both parties for their grand undertaking. Still, there's no getting away from the fact that it's a weird car.

If this were some garage project that somebody in Thailand put together for Honda Civic money, we'd be impressed. But it's a real Rolls-Royce Wraith that used to cost at least $330,000, and it might now look worthless to some. West Coast Customs isn't exactly known for fabricating wise financial investment. But we want to know just how bad the design is from a professional point of view.

The internet is filled with "expert" opinions on everything. Marouane Bembli is, however, a bit more legitimate. In 2010, he went to Italy to study for a master's degree in automotive design in collaboration Audi and Lamborghini's design teams. But you probably know him better as the YouTuber TheSketchMonkey. And the first thing he does here is to compare the Bieber-mobile with the Cybertruck. Yes, the custom Rolls is becoming that famous.

Unfortunately, that's where the similarities end because the celebrity car is over-styled. The YouTube artist says that the bumpers are weird and don't cooperate with the long lines of the car, just like we pointed out in our original story. Also, the taillight shape is just one big mess because it doesn't match anything else. And towards the end of the video, he tries to rectify some of these flaws in Photoshop.

But what do you think - does it really matter if a custom car built for a celebrity is ugly? It's not like all those Cullinans on giant gold wheels are particularly classy either. Tell us your opinion in the comments section. 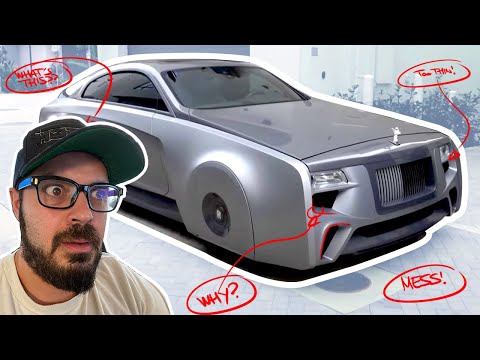