1 Beyonce and Jay-Z Are Vacationing on Jeff Bezos’ Megayacht, The Flying Fox

2 In Elon Musk We Trust - One Man's Rant

3 Virgin Atlantic Introduces The Booth, Your Very Own Private Luxury Lounge in the Air

4 That Time When We Found a Car Floating in Space

Beyonce and Jay-Z Are Vacationing on Jeff Bezos’ Megayacht, The Flying Fox

When you and your significant other are worth a combined $1.9 billion, paying $4 million a week to charter one of the world’s most impressive and luxurious megayachts must feel like a drop in the bucket. Just ask Beyonce and Jay-Z.
15 photos

Like most families in the world, every year, Beyonce and Jay-Z go on a vacation with their closest family members and friends. Unlike most people, because they’re so unbelievably rich and famous, they usually do it on board a luxurious superyacht that costs millions to rent on a weekly basis.

This year, it’s The Flying Fox, the $400 million megayacht delivered in 2019 to Jeff Bezos, the aspiring astronaut slash space cowboy and Amazon boss that’s also the one of the world’s richest man. That Bezos commissioned the megayacht was never officially confirmed, but sources in the industry claim that he is the owner. Regardless, fellow celebrities and public figures can charter it when it’s not used by its owner – and the price tag is $4 million a week.

The Daily Mail has photos of Beyonce and Jay-Z onboard The Flying Fox, off the coast of Ponza, in Italy. The header photo is supposedly of them heading to dry land in a tender, for a romantic dinner.

Not that they would need a restaurant to enjoy themselves: The Flying Fox isn’t just the biggest charter megayacht in the world (and the 19th overall by interior volume), it is literally a floating resort. Across six decks, it offers accommodation for 22 to 25 guests and 55 crew to cater to every whim and fancy, and the kind of luxury amenities regular folks can only dream of.

As we discussed in a separate coverstory, the highlights are the two-deck wellness center with a cryosauna and cryotherapy center, the two chef’s kitchens (one indoors and one out on the deck), the cinema with motion and vibration tech, the nightclub, two helipads, firepits, and the giant pool. Cavernous garages house a variety of watertoys, from inflatable watercraft and tenders, to diving gear.

Built by Lürssen on an exterior design by Espen Øino and interiors by Mark Berryman, The Flying Fox reportedly cost $400 million and was created to combine all the great things its owner had seen and experienced on other yachts into just one vessel. 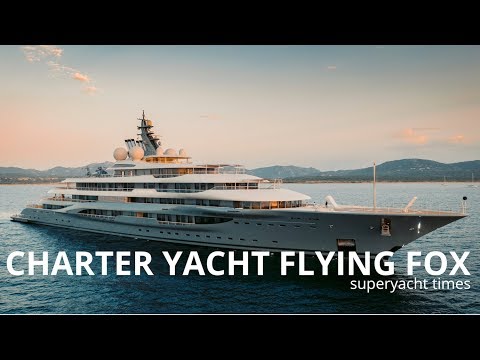