3 Is the Volkswagen Atlas an Audi Q7 for Less?

SUVs are in right now, like it or now, though if you're reading this right now, chances are you're already a fan. But what should you buy if you want that big luxury 4x4 experience but can't afford that big lease?
2 photos

In its last series, Fifth Gear magazine talks about cheapskate alternatives to a new Range Rover and Bentley Bentayga. The three contenders must cost under £7,000 and include the Land Rover Discovery, Audi Q7 and Volvo XC90.

All of them look ancient but are up to the job of climbing a hill or delivering the kids to school on a cold winter morning. You're probably familiar with all three of these iconic SUVs, but some consumer advice from Vicki is always welcomed.

Starting with the XC90, she firmly recommends the 2.4-liter diesel engine, a choice we agree with from the perspective of both fuel consumption and reliability. Perhaps the best thing about the Volvo is that it feels sufficiently narrow to squeeze down a B-road yet still has ample cargo space.

It's not particularly engaging to drive, unlike the Audi Q7. Ingolstadt's old flagship is gigantic and imposing going down the road, yet feels like a normal car from behind the wheel. The 3.0 TDI is pretty much the only engine that you'll find to buy, as the V8s and 3.6-liter gasoline V6 were too thirsty. On that note, we recommend finding the later model years, where the gearbox and diesel engine form a more efficient combo.

However, Fifth Gear's reviewer notes that servicing the Q7 can be expensive while the super-heavy SUV tends to eat a lot of tires, which given their size aren't cheap either. Which leaves us with the Land Rover Discovery.

The third-generation model was very popular in the UK, but we wouldn't even put it on this list. Vicki says she recommends buying the 7-seat version because it comes standard with air suspension but admits this has a tendency to go wrong. In addition, Land Rover engines of this era aren't exactly known for their reliability. It's very good at off-roading, though. 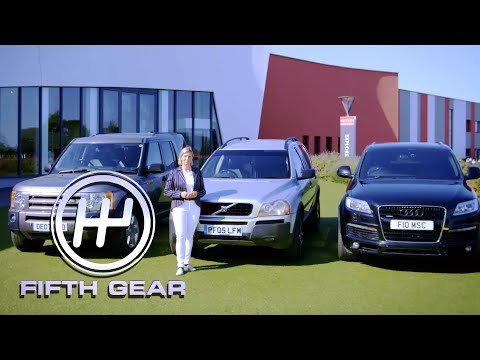