1 Ferrari California and 458 Do a Tubi Exhaust Sound Battle, Enjoy a Spirit Drive

Back in 1987, Ferrari introduced the astonishing F40 model in celebration of the four decades the Prancing Horse had been producing cars. It followed in the marvelous footsteps of the Nicola Materazzi-engineered 288 GTO and is famous not just for its performance, but also for the fact it was the last model personally approved by none other than Enzo Ferrari.
25 photos

Once it went on sale, it was naturally Ferrari’s most powerful and fastest car to date, but also the most expensive. And, drawing a quirky parallel to a popular automotive trope, it followed in the footsteps of Henry Ford’s desire to have all model Ts painted black by having the entire F40 production dressed up in the company’s famous Rosso Corsa from the factory.

Of course, just like it was the case with the legendary right-hand-drive seven cars for the Sultan of Brunei, something happened with this particular 1989 F40 example. After all, it’s got a license plate that proudly signals we’re dealing with the unique “F40 BLU,” a car that’s currently in the possession of Sam Moores, a well-known commercial photographer, amateur racer, socialite, and car collector.

But not for long, as there are just six more hours (at the time of writing) before the 1989 Ferrari F40 dressed up in a bespoke shade inspired by Porsche’s Aqua Blue Metallic will find a new owner. One that didn’t mind paying at least £765,500 to get this supercar parked in his or her air-conditioned classic car enthusiast garage. Yep, this bespoke F40 is about to fetch over one million dollars ($1,048,188 at the current exchange rate, to be more precise).

Does anyone need the highlights to decide if the F40 is worth that much? Just look at the blue wonder... Actually, let’s just recap them quickly so we forget that most of us don’t have such a huge bank account – and the money to spare for its upkeep during the years to come. It has been owned since 2015 by Sam Moores and we’re dealing here with an early example that features wind-up windows instead of the initial sliding ones.

It was first sold in Switzerland, and it traveled the world quite a bit, even ending in the possession of Liberty Walk in Japan. Then it came to the UK sporting a white-painted body kit, so it was stripped down and returned to factory specification with help from Carrozzeria Zanasi. But it also went one step further as it was repainted blue... and the rest is probably history. 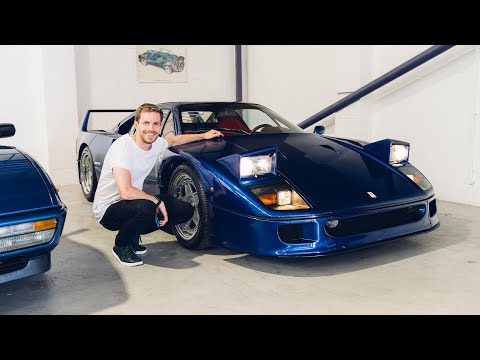