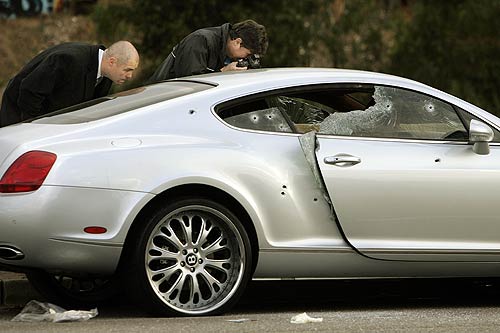 Mysterious murder stories from famous detective novels are brought to life on the Los Angeles Highway. Last Friday, a man driving an $200,000 luxury car was shot on a mostly deserted stretch of the 101 Freeway at about 3:15 a.m. Due to the incident, the southbound freeway was closed for nearly eight hours which made the morning commute extremely difficult.

According to the Los Angeles Times, the Los Angeles Police Department was informed about the shots fired and when the officers arrived at the place of the incident, they found a Bentley Continental GT full of bullet holes and its driver badly injured. The 25-year-old man was  taken to County-USC Medical Center at 3:30 a.m. in critical condition where he passed away four days later. The victim was of Latin origin and was identified as Jose Luis Macias.

However, the reason of the murder is not yet known. "This is a real whodunit," Police Lt. Paul Vernon told the aforementioned source. Because there were no immediate witnesses to the incident and the victim couldn't make any statements, detectives are investigating the case focusing on the victim's odd vehicle. Apparently, the silver, two-door 2005 Bentley with glittering silver rims did not belong to the victim. Detectives found temporary registration papers in the car and managed to verify the owner through the vehicle identification number but his identity hasn't yet been made public.

Mystery appears to be the middle name of the case. It seems the Bentley have been bought recently, but an employee from the dealership refused to give the buyer's name, while the owner of the dealership is supposedly on vacation.

Moreover, police officers found no illegal items in the victim's car which makes the murder reason even more difficult to find.

"We have not seen a freeway shooting in quite some time," Vernon said. "And this case really stands out in the number of rounds fired at the victim's car and the kind of car the victim was driving."

The vehicle was also examined by a LAPD firearms expert in order to identify which type of weapon was used but no final decision has been reached in the case so far.