2 Bentley Bentayga vs. 2017 Dacia Duster Offroad Battle Is No Joke

5 Bentley's Coupe-Styled SUV Expected Before Baby Bentayga
Up Next

Bentley Bentayga Shows off Ridiculous Acceleration, and Not Just for an SUV

Vlad Mitrache
Ever since the Bentley Bentayga came out - and even for a good while before that - the luxury SUV has split the public opinion in two like Moses allegedly did with the salty water of the Red Sea.
4 photos

You could be tempted to think there are two sides, but we actually suspect there's a third. The first one is made up of those who loathe the big Bentley and see as an abomination that would have burned at the stake had it been born a few hundred years earlier.

In the second you'll find those who like to keep an open mind about things, particularly when said things come with a 6.0-liter W12 engine that's good for 600 hp and 663 lb-ft (900 Nm) of torque. Yes, it's large and shaped like a buffalo, but my God is it fast. Four seconds for the zero to 60 miles per hour, to be more exact. That's enough to spank a lot of sports cars and to earn it a place in a demonstrative drag race with Faraday Future's unreleased electric prototype.

We said there is probably a third camp, and we wouldn't be surprised if this one held the most members. We're talking about that type of people who are just too nice to admit they like it, so they pretend to dislike the Bentayga while secretly they would drool all over its very expensive upholstery. It's a controversial vehicle, but we believe that if enough of these videos make it out there, this camp will soon migrate into the direction of the second.

Maybe the list of ridiculous SUVs powered by engines with 12 cylinders should have ended with the Mercedes-AMG G65, but it didn't. And it looks like there are still more to come with Lamborghini preparing its own supercar on stilts. Other brands, such as Maserati, are also taking the leap into this heavily disputed segment, even though we don't suspect they will have a $200,000 option on their list as the Bentayga does.

Yes, it's a ridiculous car, but at least its performances are just as mad, and for some, that's all that matters. But despite what you see here, Bentley's SUV also has a responsible mode where it switches off half of its cylinders to achieve a reasonable fuel efficiency. However, we doubt you would have enjoyed a clip featuring its more sensible part. 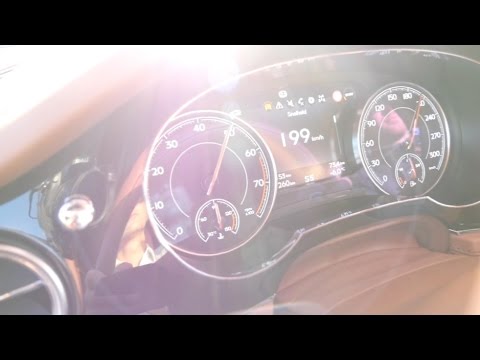