1 Bentley Will Drop Its First NFT This September, Here's What We Know About It

At the time of its release in 1995, it was one of the most expensive production cars that money could buy, but nowadays, a used example in great shape can be had for less than an entry-level BMW 430i Convertible.

Bentley Azure Mark 1: The Exquisite Open Top Icon That You Can Own for Less Than $50,000

The summer is in full swing and during this time of the year, the vast majority of car enthusiasts turn to convertibles. Some are lucky enough to own one (or more) while others are thinking of buying one. If you find yourself in the second category and you happen to have a thing for rare, ultra-luxurious rides, yet your budget is limited to around $50,000, the epic Bentley Azure Mark 1 might just be a perfect choice.

A four-seat convertible grand tourer, the Azure was conceived in the early-1990s on the platform of the Continental R, a luxury coupe originally launched in 1991. he

The story of the Azure starts with its 2+2 coupe sibling called Continental R. Originally launched in 1991 with the aim of reviving the brand in key markets such as North America, it was the fastest, most expensive, and most powerful Bentley model ever built.

A few years later, parent company Vickers - who also owned Rolls-Royce at the time – decided that the Continental R would be even more appealing in convertible form. With the help of Italian coachbuilders Pininfarina, Bentley engineers went ahead to transform the coupe, and about two years later, it was ready to go into production.

Apart from the Rolls-Royce SZ platform and powertrain, the Azure retained most of the design cues from the Continental R. Although conceived with a total disregard for aerodynamics, its boxy body looked stunning and well-proportioned from every angle. Unwilling to sacrifice passenger comfort and practicality, the engineers didn’t shorten the structure, which meant that the luxurious convertible was 210.2-inches (5,340 mm) long and 74.0 inches (1,480 mm) wide. With those ample dimensions, it was more of a land yacht than a regular car. With the addition of upscale features such as huge leather-upholstered seats, genuine wood trims, or a big engine, the Azure tipped the scales at 5,754 pounds (2,610 kg).

However, the evolved L-series V8 tucked away under the hood helped it perform surprisingly well for its size, weight, and poor aerodynamics. Displacing 6.75 liters, the venerable unit made use of a single, intercooled Garrett turbocharger, and with the help of an updated Zytek management system, it could produce 385 hp at 4,000 rpm and 553 lb-ft (750 Nm) of torque as low as 2,000 rpm. All that power was sent to the rear wheels via a modified, GM-sourced, four-speed 4L80-E automatic.

Built as a luxurious and comfortable cruise ship on wheels, the Azure was more than capable of sports car-like performance figures. From a standstill, it could accelerate to 60 mph (97 kph) in just 6.5 seconds and reach an electronically-limited top speed of 150 mph (241 kph).

The beautiful convertible made its public debut at the 1995 Geneva Motor Show and continued to be produced until 2003 when it was replaced by the thoroughly revamped Mark II. In total, Bentley went on to build 1,403 first-generation units, each with a starting price of around $350,000 ($671,283 today). During its eight-year production run, it was the most extravagant and expensive convertible that money could buy.

So why should you buy one now?

Well, the first reason is the price. As I mentioned before, a used example in great condition can be had for less than $50,000 – ten times cheaper than it was brand-new. The value of this model has dropped significantly in the last decade, but this is bound to change in the future.

The second reason is that you get to own a limited-production, ultra-exclusive Bentley that will undoubtedly turn heads. It’s still extremely gorgeous by today’s standards and even if it doesn’t come with cutting-edge features like dual-zone climate control or lane-keeping assist, it still offers all the modern creature comforts that you would need.

Moreover, it’s tailored for ultimate comfort, so cruising around in one will feel like taking your living room for a spin. Both front and rear passengers have plenty of room and the exquisite seats feel more like armchairs taken from a palace than conventional car seats.

The final reason for spending money on this Bentley is its legendary engine. The last, most modern iteration of the Rolls-Royce/Bentley L-series V8, its 6.75-liter is adequately powerful but more importantly, it’s revealed for its bombproof reliability. Of course, some components of the forced induction system will fail at some point and the repairs won’t be cheap, but if you regularly change the oil and cooling fluid, there’s not much else that can fail on this mighty powerplant.

Currently a grossly underrated open top icon, the Bentley Azure is an absolute bargain that will make you feel like royalty for less than what you would pay for an entry-level BMW 4 Series. With patience and care, it could also prove to be a great investment for the future.

You can admire a 1997 example in the YouTube video below posted by Fantasy Junction. 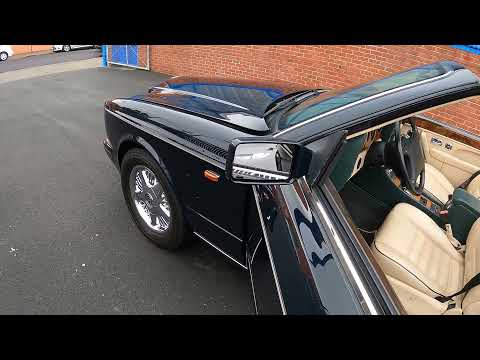