2 Is This the One? Jennifer Lopez and Ben Affleck Allegedly Buy Danny DeVito's Former Home

3 Over the Weekend, JLo Switched From a Bentley Continental GTC to Ben Affleck's Tesla

When you’re a celebrity kid, getting behind the wheel for the first time is an entirely different – and potentially costly – experience. Just look at Ben Affleck and Jennifer Garner’s 10-year-old son Sam, who’s just been involved in his first fender bender.
36 photos

This isn’t exactly a crash, though it’s described as one in the media. Technically, it’s not even a fender bender, since nothing seems to have been bent, but two very expensive rides did make contact – and it was because Sam, a 10-year-old, was at the wheel.

It happened outside L.A. luxury car rental dealership 777 Exotics, where Ben Affleck and fiance Jennifer Lopez were visiting. Along for the ride was Sam, Ben’s son from his marriage to actress Jennifer Garner, and they were checking out a bright yellow Lamborghini Urus, seemingly the latest addition to the rental fleet, shown in the IG post below.

As the video below shows, at one point, Sam got in the driver’s seat, with the engine running. As his father looked on from outside, he put the Urus in reverse and backed it into a white BMW parked next to it. Sam and Ben went out to inspect the damage, and then a couple of employers from the dealership came out. Ben remained unfazed, and even got behind the wheel himself to rev the engine, while Sam ran into the office.

TMZ reports that, despite the rather dramatic-looking photos snapped by the paparazzi (available at the link), there was no damage to either car. In fact, the dealership even refused to acknowledge the bang, saying only that the cars were parked very close to one another, and that was all there is to it. If any damage was done to the cars, which is doubtful, the issue was settled before the celebrity couple left the premises.

No word if Ben and JLo picked the Urus for their next ride either. 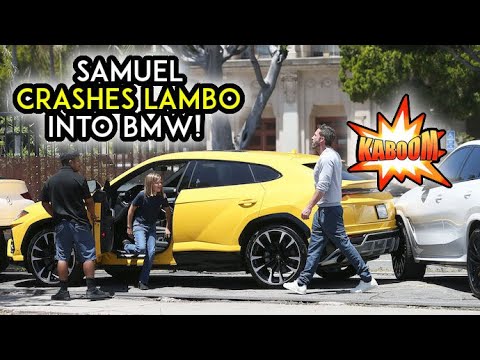