1 Ashton Kutcher Bought a Ticket to Fly to Space With Virgin, Backed Out

5 Next Year, We’re Sending JUICE to Jupiter in Search of Water
Coverstory

Cristina Mircea
Just a bit over a month ago, NASA’s Juno spacecraft succeeded in flying closer to Jupiter’s moon Ganymede than any other spacecraft in more than 20 years. Now NASA shares an animation that lets us see what Juno saw in its flyby.
7 photos

It was June 7 when NASA’s probe managed to get so close to Ganymede, the largest moon in our solar system. The JunoCam snapped some great and detailed photos of Jupiter’s satellite, capturing its icy shell, big craters, and impressive landscapes. It also took its 34th flyby of Jupiter a day later.

NASA’s team in charge of Juno’s missions took advantage of the spacecraft’s cam imager to put together a three-minute and a half animation. The video published by NASA transforms the viewers into the “starship’s captain”, allowing them to explore Jupiter and its giant moon just like Juno did in each flyby.

According to NASA, the animation aims to show people the beauty of deep space exploration, helping them explore our solar system firsthand, virtually orbiting Jupiter and flying past one of its icy moons. The video starts with Juno approaching Ganymede, passing within 645 miles (1,038 km) of its surface. You can see both the moon’s light and dark regions as well as one of the largest craters on Ganymede, the Tros crater. Compared to our planet’s moon, Ganymede’s large craters are considerably flatter, with almost no vertical relief.

Other cool particularities to be seen in the animation are the circumpolar cyclones at the north pole and Jupiter’s string of pearls, massive storms that rotate counterclockwise in its southern hemisphere, which look like white ovals.

The team also simulated lightning which is what we could see as part of the planet’s giant thunderstorms.

There’s a distance of 735,000 miles (1.18 million km) between Ganymede and Jupiter. Juno can travel that distance in less than 15 hours. 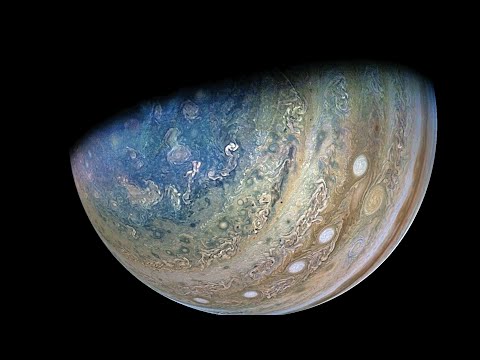