Aurel Niculescu
Looking for the coolest, quirkiest, and stunning Blue Oval pickup trucks in America? Well, the Ford Era “What The Truck?” series on YouTube certainly obliges. And it sometimes expands the search to North America, not just the U.S.
42 photos

Count on Solomon Lunger, the mild-mannered host of the Ford Era channel on YouTube to uncover all sorts of Blue Oval gems. He generally focuses on the F-Series pickup trucks (after all, he owns a 1970 F-250 Crew Cab nicknamed Gold Dust), but we have seen all many wonders in the past, from Luxury Pre-Runners to fabulous restomod Broncos.

Interestingly, even Solomon doesn’t know everything about the F-Series world. But he’s a quick learner and one to share knowledge. So, in the latest episode of the series, he met Rafael Garrido from the Dynasty Truck Club Inland Empire in California to discuss his rare and pride-bringing possession.

It’s a 1978 Ford F-150 Ranger XLT, but the odd thing about this sixth-generation F-Series is that it wasn’t made in America. Instead, it was produced in Mexico and according to local specifications. As it turns out, Mexican and American F-100/F-150 models from the era are not the same. This is because the Mexico-born examples were even shorter (about 3.5 in./8.9 cm) than an American Short Bed as they borrowed the chassis from the U.S.-specification 1967-1972 fifth-generation short beds.

Additionally, the entire tailgate, along with the taillights and the trim, was different, making it a bit akin to the Bumpside models. This particular ‘78, nicknamed “La Barbie” according to the owner, was discovered on Craigslist about a decade ago and immediately snatched away as a rare find. Although it still wears the original selling dealer’s plates to this very day, it’s obvious this truck went through a raft of modifications.

First and foremost, the proud new owner started by taking apart the entire truck to the chassis. After the restoration, this built F-150 Ranger XLT looks even shinier than it was the first day of its life. That’s probably because of all the polished chrome seen around the body – and above else – inside the engine bay.

It's also made to be driven, with a new suspension setup, new five-speed transmission, a 3.73 Posi rear differential, as well as a tweaked 351ci flathead Windsor V8. By the way, for us, the highlights came as a trio: the stunning paintjob, the cool Lariat-inspired interior, as well as those 24-inch (with 405 mm rubber!) deep-dish rear wheels... 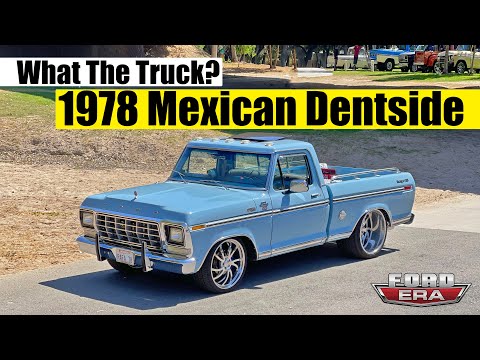