2 Fiido’s The Beast Is an Offroad e-Scooter and Go-Kart Combined, Awesome

EV Owners in the U.S. Would Rather Pay $6/Gallon Than Wait in Line for a Charging Spot

Micromobility company Beam has announced its plan to test a new AI-powered system for its electric scooters, which will enhance safety by adjusting the speed of the vehicle based on road surfaces.
6 photos

It’s been clear for a while now that micromobility vehicles are a better alternative when it comes to urban commutes, but there are still issues to be dealt with and aspects to be improved. Electric scooters may be fun but they’re all over the place, literally and figuratively, and they’re not always in compliance with regulations, nor are they always safe, especially for pedestrians.

To address this issue, Beam has teamed up with technology company Drover AI, to test its PathPilot, an advanced IoT (internet of things) module that can detect a city’s infrastructure (like footpaths, roads, etc.) in real-time using an onboard camera. The system doesn’t require perfect positioning or precise mapping, being able to rely on its camera to identify bike lanes, sidewalks, and other structures, which makes it very useful in areas that are GPS-challenged.

Beam’s so-called Pedestrian Shield will be tested on its e-scooters, with the purpose of identifying where the e-scooter is ridden (bike lanes, sidewalks, streets) and employing restrictions accordingly, like reducing the speed of the vehicle.

In the first phase of the trial process, which is kicking off this week, Beam is going to integrate the Pedestrian Shield into its fleet in several Australian locations: Brisbane, Adelaide, Canberra, Hobart, Launceston, and Perth. The company plans to gather useful data from these trial cities to help it roll out the technology nationwide later this year.

In a second phase of the process, which is scheduled for launch in mid-2022, the Pedestrian Shield will add another feature to the mix, pedestrian prevention to be more specific. That means the system will be able to detect pedestrians on footpaths and reduce the speed of the scooter to prevent a collision.

Drover's AI (artificial intelligence)-powered system can be used for other purposes as well, to improve parking compliance, to mitigate loss and theft, and more. You can see it in action in the video below. 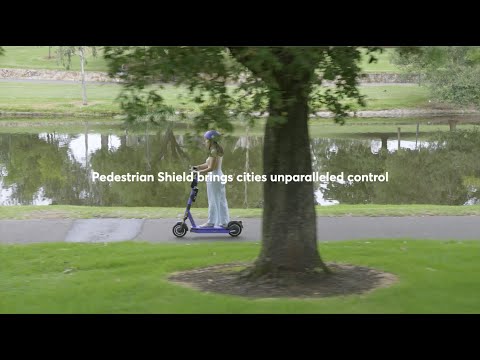