While many Blue Oval fans are still expecting the company to finally unveil the latest and (arguably) greatest seventh-generation Ford Mustang, others have ‘quietly’ settled into an older lifestyle. Well, sort of.
27 photos

Since we are dealing with a Fox Body Ford Mustang video (embedded below), there’s nothing quiet about this third-generation pony car – not even when standing still. Instead, the videographer behind the Jmalcom2004 account on YouTube is again right in the middle of a heated battle – this time for a $10k-class big pot, and he focuses on a bruised Fox Body underdog.

The Ford Mustang might look like a derelict heap of junk at first glance, but the meaty Hoosiers and parachute strapped to the back paint a different, feistier story. And that is before you get to hear the furious whistle of the “big a$$” turbo strapped to an LS-swapped motor and tucked under the slightly bulging hood.

That’s according to comments from quarter-mile dragstrip fans that were present at their home track during an undisclosed big pot event and personally saw this ride perform like a hoot. Anyway, we do know for sure the action took place at the Middle Georgia Motorsports Park in Jeffersonville, GA, and the feature (uploaded on July 21s, 2022) does present us with both day and night perspectives.

First, probably to get the hang of it, the Fox Body Mustang raced and flawlessly won a battle against what looked like a contemporary but less feisty rival (possibly another Fox Body) at the 1:40 mark – and there is also a good deal of POVs for our (sometimes guilty) viewing pleasure. Then, from the 2:10 mark, it is time for the final brawl for the $10k class prize, where the Fox Body met its match.

That one was a menacingly turbocharged compact pickup truck that may or may not have looked like a Chevrolet S-10 (or GMC Sonoma) during its previous, civilian life. Alas, this time around, a humongous wheelie – which was harmoniously landed like a boss – that you can see in all its glory at the 3:23 and 3:45 marks, kind of got in the way of all-out quarter-mile dragstrip glory… 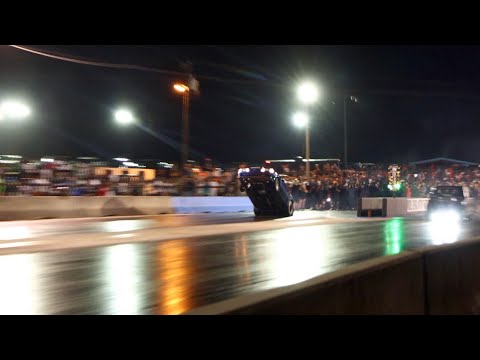