2 Neither Batman Nor James Bond Can Afford Their Iconic Cars, Batmobile and DB5

3 This Batmobile Replica Is a 1965 Ford Mustang in Excellent Disguise, Road Legal

5 One of the Most Ostentatious Batmobile Replicas Wants a New Owner
Car video reviews:
Up Next

Triumph Going After the Harley-Davidson LiveWire With Project TE-1

Regardless of the iteration of the Batmobile, one thing every one of them shares is the size. And for a very practical reason: Batman needs a big enough vehicle to house all those weapons and all that technology that helps him fight the bad guys.
11 photos

Not this Batman, though.

All this Batman needs is a big heart. He’s not the real Batman, of course, but that doesn’t make him any less of a hero. Neither does the fact that he drives a Polaris Slingshot instead of an actual Batmobile.

Available at the bottom of the page is a new video from Viral Hog. Earlier this month, Batman was spotted out and about in Calgary, Canada, and his choice of transportation seems rather odd. A little digging online based on the sticker on the rear end of his Polaris Slingshot, and you find that it’s actually very much in character.

This man goes by HolyBatman, and he is a Batman impersonator who does mostly charity work. He has had his Polaris Slingshot for a while and, due to the three-wheeler’s aggressive design, it hardly needs a lot of customization except for the Batman logo here and there. Since he uses it mostly to move from job to job and as a photo prop at the events he attends, the Slingshot does his job.

In the video below, he seems to have updated his costume with a sidekick as well. Look closely, and you will notice that his passenger seat is dressed as Robin, which is a good addition, though rather useless in real life.

The Slingshot is legally a three-wheel motorcycle. Prices for it range between $20,000 and $33,000 depending on how you spec it, but all examples run on the 2.0-liter 4-cylinder ProStar engine built in-house. Horsepower ranges between 144 and 178, which, combined with the small and light body, means Batman can respond to an emergency very quickly. Which is perfect, before superheroes need all the help they can get to do the good work. 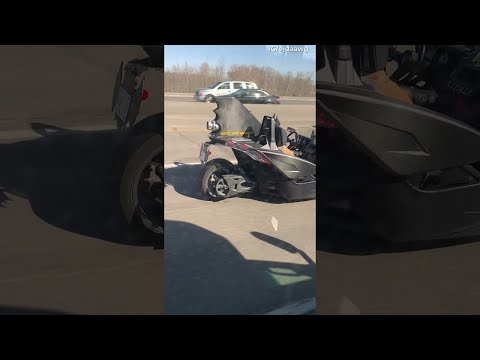