Mihnea Radu
Eons ago, both Porsche and Mercedes had the idea of making smaller sports cars for people who weren't successful surgeons in their 50s and 60s. The Boxster and SLK were born, and the rivalry between the two was strong.
3 photos

We still fondly remember the originals. While the Boxster had sweet-handling a perfect balance, the SLK-Class once offered a mighty 5.5-liter V8 engine in a body that vaguely resembled an F1 car.

Alas, the two changed over the years and now feel less connected. But AutoTopNL still decided to put together a comparison video between the current base Porsche 718 Boxster and the Mercedes-AMG SLC 43. Perhaps this will be the last time we talk about the latter since it was sent off with the "Final Edition."

Evolution for the Boxster means it's now powered by only four cylinders from its 2-liter boxer engine, turbocharged to the tune of 300 horsepower and still capable of impressive performance. Meanwhile, the SLC 43 is among the few Mercedes models with a bi-turbo V6 making 367 HP, which technically isn't an AMG engine since it's not built by hand.

The SLC is heavier, but the 0 to 100 km/h times are the same at 4.7 seconds. This would be good marketing for Porsche - it's base model being as good as an AMG. However, we're talking about a €60,000 car here. You could get similar performance from an AMG A35 hot hatch costing 3/4 the money or... a diesel S4 Avant.

This independent test proves that the Porsche is faster, especially around the top speed. As for sound, both are a little disappointing. The AMG SLC 43 is inferior to the C43 which has the same engine but more power . Obviously, Mercedes didn't invest any money in a car it knew would be discontinued. Meanwhile, the 718 is only acceptable once optioned out with a sports exhaust. Even so, it's no Cayman GT4. 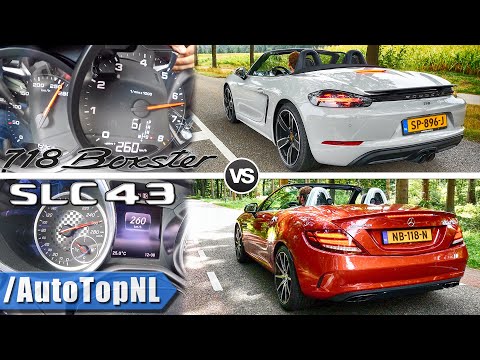