1 Massa Thanks Barrichello for Homage and Support

Barrichello Wishes for Win at Spa 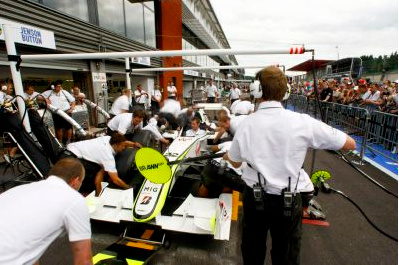 Following his excelent performance in Valencia, the enlivened Brazillian aims to score another win in Belgium as well. Rubens thinks he will have a good run on the Spa-Francorchamps circuit, which he described it in three words as being "fantastic, fantastic and fantastic".

Barrichello admitted he doesn't have a contract for 2010 with Brawn yet, but said he is determined to stay in Formula One. "Well, in terms of will, I am 100 per cent determined to stay in F1. I showed last year that I didn't want to stop, and I believed that very much. Of course I don't want to be in the situation of last year, where you are waiting so much," said Rubens.

When asked for what he wishes at the moment, the Brazillian responded: "my wish is to win this grand prix. F1 is a place where it is not that straightforward sometimes. Things happen and you are only as good as your last race. My last race feels brilliant, so I must use that to my advantage."

Barrichello declared there are no ambitions between him and his team-mate, Jenson Button, and that they respect each other and won't get in the way of one another on the track.

"We are working well together and that is the way it should be. We are not looking like we are going to have a clash on the racing track or anything like this. We just respect each other and may the best man win," added Rubens.

The Brazillian then revealed the team has discovered their tire warm-up glitch, but didn't proceed in giving any details on the matter.

"We seem to have found what was the main problem. Valencia was hot and it helped big time, but the exercise we had there we may be able to use here on a cooler track and it can still be okay."