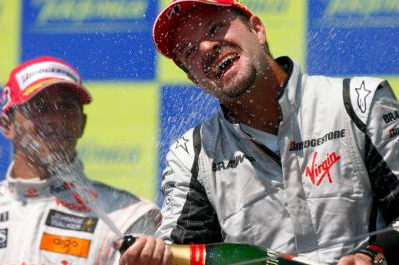 Thrilled by his European F1 GP victory, Rubens Barrichello is happily looking to extend his career in Formula One. The 37-year-old Brazillian feels more competitive than ever, especially as the Brawn GP car gives him confidence.

Stimulated by his driving this year, Rubens reckons he still has potential for Formula One wins and wishes to stay in the Big Circle and add his 17th consecutive season in the pinnacle of motorsport. However, the Brazillian agrees the 2010 reveals a very complicated driver market.

"It's early, there's lots of talking because of Alonso (to Ferrari) and this and that but it takes me 15 minutes to get out of the circuit because I talk to everyone and I love to talk to everyone, so I'm really leaving my chances open for next year", said Barrichello.

"There has not been a time in my life which I have loved more than racing and driving now and I think I'm doing a really good job. At 37 I think I have reached the peak of my driving", said the Brazillian in a report by GMM news agency.

BrawnGP team boss, Ross Brawn, declared on Friday he is in discussions with both of his drivers concerning their contract extensions. "We are obviously very happy with their performance this year and it is not appropriate for me to talk about what we are doing with our drivers at the moment", declared Ross Brawn.

One thing is certain however, after a five-year break from winning an F1 GP, Barrichello feels determined and motivated again.