1 Five Fantastic Vehicles That We Lost Too Soon

5 Why the 1999 Buick Riviera Silver Arrow Was the End of an Era
Car video reviews:
Up Next

Silver Spruce 1969 Chevy Camaro Is a Pro-Touring Gem, to Spin Them Schotts for a New Owner

Back in the 1980s, Buick launched the Reatta. A two-door, two-seat, grand tourer that was first offered as a coupe, and as a convertible. It was supposed to be a halo car for the brand, and the marque planned to make 20,000 per year.
9 photos

As you may be aware, Buick did not manage to sell that many units of the Reatta. Instead of the projected 20,000 per year, total annual production peaked at just over 8,500 units. So, in four years of production, the company made just one unit more than 21,750.

It was the first and only Buick to feature pop-up headlights that moved the entire assembly, and its convertible variant was not followed up until 2016, when the Cascada was launched.

You might say that the Reatta never caught on, and its transverse front-engine configuration with front-wheel drive might be the reason, while some think it was related to its GM E-body roots. It does not matter anymore, does it? It shared its underpinnings with the Riviera of the time, but came with interesting styling and rather nice features for its day.

Sure, the design was pure 1980s, but that might not have been so cool at the end of that period in time. Now, there might be people interested in owning a Reatta just because of the rarity factor, along with the possibility of finding parts with relative ease.

If you do happen to stumble upon a Reatta, it might be in a poor condition. This example, seen in the photo gallery and the video embedded below, has not been washed in 22 years. Things are not looking great, and the vehicle has mold even on its exterior.

Even with the entire cleaning process sped up, it does take quite a bit of time to get the Reatta looking more like a vehicle than a moldy car-shaped object. Its interior required plenty of attention, and we can only hope that it will manage to be returned to a rather normal scent for an older vehicle.

If there is a takeaway from this video, we think it should be the fact that you must do your best to never leave a vehicle in a place for so much time. If you stop using something, consider selling it to someone else. 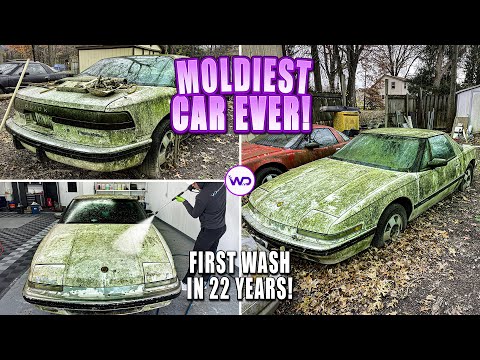