Home > News > U-turn
Mihnea Radu
American cars from the 1960s make the best barn finds. Stumbling onto one of those is the car equivalent of the leprechaun pot of gold at the end of a rainbow. However, we'd argue that this Datsun 280Z is just as valuable.
6 photos

As America dropped the ball in the following decades, Japanese automakers entered the market. Generations of people grew up in Civics and Corollas, now having the necessary spare cash to buy the earliest examples of semi-exotic imports.

The Datsun 280Z should be on their radar and detailing special AMMO NYC just got access to such a car. The story is that a guy near Pennsylvania has been keeping this sports car to himself since it was new. It's only got 350 original miles on the clock and apparently hasn't been washed in 44 years.

44 years - it's pretty rare for any type of iconic car to hide for that long. Apparently, even the interior smells new because the doors have never been opened in so many years. Likewise, the gas cap has never been used and all the stickers are in place.

Why is there no front bumper? Well, when he got home to Pennsylvania, the owner found there was a small dent. The dealership eventually agreed to send him a new bumper, and while that happened, the guy decided to fix a few other things. The console was removed to run wires for a new radio. During all this, the buyer ran into some money problems, so he had to set it aside. Doesn't that sound like everybody's project car?

A thick layer of dust covers the car, but once that's removed, the paint is in relatively good condition and only needs a light buffing. All the trim is in good condition, and seeing it go back on the car after nearly half a century is very satisfying. 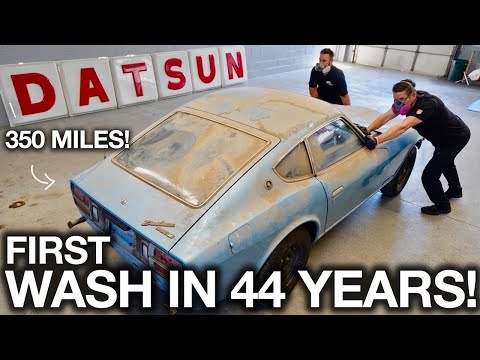