Back in the early 1990s, Chevrolet decided to reinvent the Impala SS nameplate for contemporary duties. First as a 1992 Detroit Auto Show concept, then from 1994 to 1996 as a high-performance sedan with Caprice and Corvette DNA.
24 photos

While the 1992 NAIAS Impala SS prototype featured a mighty 500ci (8.2-liter) engine, the production series version eventually settled for a 350ci (5.7-liter) mill derived from the Corvette’s LT1 V8 motor. Additionally, bad guys probably winced whenever catching sight of the Impala SS because the model was heavily based on the Caprice 9C1 police package.

This 1994 Chevrolet Impala SS certainly looks fresh out of undercover assignments, but as it turns out they would have been noticeably short ones. This is because the major draw for this example is the extremely low mileage. Sherman, Texas-based PC Classic Cars is offering this black unit with a mere 4,058 miles (6,531 km) on the odometer, and they’re of the great “actual miles” variety – not the dreadful TMU.

It seems the “U8555” factory Black paint was nicely kept during prior ownership (there are no details of an eventual repaint), while the SS trim and 17-inch SS wheels further add to the cool 1990s atmosphere. And there are many more highlights. For starters, there's a clean Carfax along with a nice set of interior creature comforts: factory gray leather upholstery, bucket seats, as well as powered mirrors, locks, seats, steering, brakes, and cruise control.

But, of course, the most important thing is what lies underneath the dark hood. There, the next owner will find an original 5.7-liter (350ci) V8 packing 260 horsepower back in the day. It’s mated to the 4L60E four-speed automatic transmission, of course, and also sends its rumble through the factory exhaust that was upgraded with aftermarket mufflers.

All in all, it’s not a bad package at all. It’s a genuinely nice and subtle performance car, and as such it’s no wonder the classic car dealership is asking no less than $33,500 for this Impala SS. 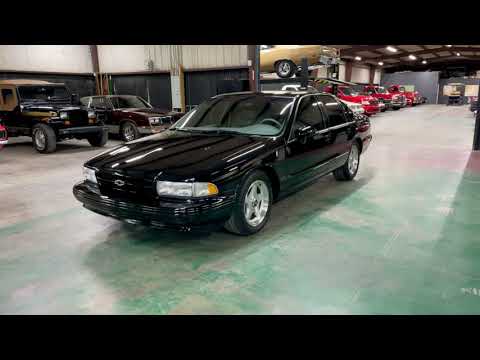